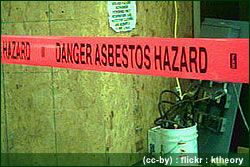 Here is a valuable article from Asbestos.net on asbestos dangers and asbestos pollution from vermiculite.


The dangers posed by asbestos are on-going for many people in the US and elsewhere because of materials used in buildings and automobiles. Unfortunately these asbestos dangers can manifest years after exposure.

Many schools still contain asbestos. Picture thanks to ktheory

There have been many cases of secondhand exposure to asbestos - most often in spouses or children who laundered the clothes of an asbestos worker, or otherwise came into close contact with asbestos-contaminated items - which led to a diagnosis of mesothelioma or asbestosis. This kind of disease not only affects the person with it, but can also have a major impact on their family. Families can receive support and counseling from numerous sources, such as mesothelioma.net.

This article looks at some of the health issues arising from exposure to asbestos.

Article with thanks to Asbestos.net

Please note some readers may consider this article as advertorial.

No money was paid for the article but the interests of the writer may be served by some aspects of the article, for example, by outgoing links.

What You Need To Know About Asbestos Mesothelioma and Vermiculite

The mountainous region surrounding Libby, Montana may be beautiful, but its outward appearance belies its potential health hazards.

Once home to the country's largest vermiculite mine which was owned and operated by W.R. Grace, Libby has since become known as “Ground Zero” for mesothelioma and other asbestos-related diseases, many of them fatal—and all of them devastating.

The vermiculite mines were highly contaminated with fibrous tremolite asbestos, which is the main cause of a rare form of cancer called mesothelioma.

The fibers of the asbestos were released during the vermiculite mining and manufacturing process, contaminating the air, soil and water in the Libby area. Particularly at risk for developing the mesothelioma cancer and other diseases were the mine and factory workers whose jobs exposed them to the carcinogenic material on a daily basis. However, there have been numerous cases of non-employees who were exposed, and who later became ill, simply by virtue of living in the region.

Asbestos fibers, which are microscopic, cannot be eliminated from the body once they have been breathed in. They penetrate the mesothelium, which is a protective sac surrounding the lungs and other organs, and once there are liable to cause the cells to turn malignant, eventually forming a tumor. Due to its tendancy to spread across the mesothelium instead of remaining localized, is difficult to surgically remove. Similar to most cancers, mesothelioma can also metastasize (spread) to the lungs, the lymph nodes, and other areas of the body.

Although malignant pleural mesothelioma (lung) is by far the most common kind, mesothelioma can also occur in the lining of the abdominal cavity, in which case it is referred to as peritoneal mesothelioma, and in the membrane surrounding the heart (pericardial mesothelioma).

It is unclear how the asbestos fibers reach the peritoneal mesothelium, but it is believed that they can be ingested as well as inhaled. This means that airborne asbestos particulate can settle on food or in beverages, and be consumed that way. Clearly, this increases the risk of asbestos-related disease for those who live or work in an area that is prone to asbestos contamination.

Moreover, the toxic dust that is created when asbestos is mined or manufactured not only can linger in the air and be carried on wind currents, but can also cling to materials such as clothing, hair, and automobile upholstery. In this way, an asbestos worker can transport the fibers home to his or her family.

There have been many cases of secondhand exposure to asbestos - most often in spouses or children who laundered the clothes of an asbestos worker, or otherwise came into close contact with asbestos-contaminated items - which led to a diagnosis of mesothelioma or asbestosis.

A relatively rare cancer which strikes as many as 3,000 people in the United States each year, mesothelioma is also unusual in that a very long time can elapse between the initial asbestos poisoning and the symptomatic development of the disease.

Most patients are over the age of 50, and many are already retired from the jobs that exposed them to this carcinogenic mineral. Their symptoms, which arise slowly and may not be particularly worrisome at first, include coughing, shortness of breath, and fatigue. Sometimes a patient may experience chest, side or back pain.

Because these symptoms are not drastically different than having a cold or the flu, many patients try to ride them out and may not consult a doctor immediately. Unfortunately, because the disease does progress so rapidly, it may have already reached an advanced stage by the time it is accurately diagnosed - many cases of mesothelioma are initially misdiagnosed as emphysema, non-asbestos-related lung cancer, or bronchitis.

Surgery to cure the mesothelioma is only feasible when it is diagnosed in Stage I, which is rare. Even then, the location of the tumor and the patient's health may make surgery inadvisable.

In later stages, surgery to provide relief from symptoms may include thoracentesis, which drains excess fluid from the pleural cavity, or pleurodesis, which uses drugs to fuse together the two layers of the mesothelium, in order to prevent fluid buildup in the first place. Both of these procedures are relatively minor and can be repeated as necessary in order to provide pain relief to the patient.

Additionally, radiation and chemotherapy can be used in order to slow or stop the spread of the tumor within the body. Often a combination of these established treatments is used, and many patients have also found relief from pain and other symptoms by turning to alternative, or holistic therapies. While these are not intended to shrink tumors, such approaches as massage, acupuncture, nutritional supplements, and hypnotherapy can make the patient more comfortable by lessening pain or counteracting side effects, such as nausea, of traditional therapies.

At least 200 Libby, Montana residents have died from asbestos-related diseases such as mesothelioma, and thousands more have been sickened.

It is expected that those numbers will rise, due to the disease's long latency period, in addition to the fact the residual asbestos-contaminated vermiculite material was widely used in children's recreational areas.

The US Environmental Protection Agency declared its first public health emergency, covering Libby and nearby Troy, in June 2009. It has pledged 130 million dollars in clean up and medical assistance to those people affected by the tragedy of asbestos poisoning.

Please also see other articles on pollution, transport and natural cleaning for further information related to asbestos dangers and asbestos pollution and for prevention strategies.

Green Earth and The Cause of Land Pollution

More on asbestos and asbestos dangers

Other asbestos dangers are still found in the automobile industry in particular and even in schools.