The Benefits of Wind Energy

The benefits of wind energy are quite clear.

Here is a clean, renewable source of energy which can supply substantial amounts of power. Wind power generation, world wide, has increased threefold over the last three years and this pattern looks set to continue.

In 2010, there was as much as 150 gigawatts capacity from wind power sources across the world, with many new developments across Europe, Asia, China and the Americas. In 2012, Europe has just passed the 100 gigawatt mark for wind power generation.

This page looks at the main benefits of wind energy for a power-hungry world. Scroll to the bottom of the page for a quick list of the benefits and advantages of wind power. 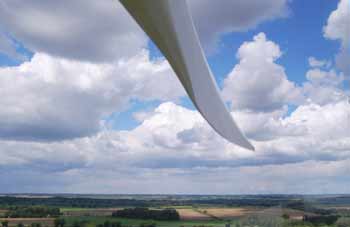 A wind turbine blade: the view from the top of a turbine

Wind power has been with us for quite a while. There are shiny new wind turbines going up across the world as I write and huge new developments are in train. Enormous 200 foot turbines are new to our landscapes but wind power of various kinds has been used for centuries.

Anyone who has enjoyed a visit to the Netherlands, or even to the eastern regions of Great Britain can hardly have failed to come across old windmills. Windmills were used from medieval times until the 19th Century for grinding corn and other labour-intensive tasks such as pumping water. In the fenlands of East Anglia windmills helped pump water to drain the land for agriculture.

There are a few restored windmills working still. They provide both a tourist attraction and produce quality stone-ground flour.

The first electricity-generating windmill was made by American Charles F. Brush in 1888. Wind powered electricity showed a lot of promise in the early 20th century but turbines faced stiff competition from coal-fired power stations. The shortages of fuel oil and coal during the second world war prompted renewed interest in wind.

In 1957 Johannes Juul built the first modern turbine, the Gedser, which is not dissimilar to ones still used today.

Now modern wind turbines harvest electrical energy from the wind, using a variety of sizes and designs. In the UK the wind energy industry is growing at 30% per year and new turbines are being installed at a prodigious rate (though some would say "- not fast enough!"). The benefits of wind power are controversial, to say the least, as many people have issues with their visual impact upon the landscape.

Modern wind turbines are an entirely different matter as compared to the windmills of old. Many of the turbines are enormous. The areas occupied are huge, too in many cases.

A wind turbine at Swaffham, Norfolk Now gigantic "arrays" are being planned across the world.

Here in Britain there is the London Array off the coast of Kent and two giant arrays off the coast of Wales. The London Array will generate over 1 gigawatt of energy (1000 megawatts). The turbines, costing in excess of £2bn to buy and install, will stand on the seabed. Each is 87 metres tall - they will clear the wave tops by more than 200 feet, (as the North Sea is quite shallow for the most part). The power supplied by the London Array alone will be enough to service 3/4 million homes' energy needs, so many people will directly experience the benefits of wind power in the near future.

Firms such as Siemens and E-on have recognised the many benefits of wind power and are now moving towards large-scale projects. Coastal and maritime projects are becoming more common as there is no need to fight for approval against local opposition. 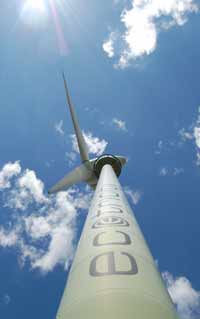 However, the advantages of wind power are as yet not appreciated by all; wind turbines are perceived as noisy and unsightly by a significant proportion of people. Many time-consuming and expensive battles have been fought between developers and local people over the installation of wind turbines. In Britain many local authorities have been unwilling to grant planning permission to onshore projects because of perceived difficulties with local opposition.

There is a further issue with the need for more huge pylons to carry the electricity to where it is needed. Beautiful landscapes across Wales, Scotland and England are being threatened by the push to install these giants. Places as iconic as the Cairngorm National Park and the Great Glen, Constable country in Suffolk and the Severn valley on the Welsh borders will be affected.

The benefits of wind power may be compromised by transportation issues. However, another advantage of offshore wind power installations is that the wind blows more consistently at sea, especially in locations well away from the coast. There is now experimental work in development to create floating wind power turbines.

Size and noise are not generally a problem for offshore wind farms - but maintenance costs can be much higher.

Britain has made a commitment to produce 20% of power supplies by sustainable means by 2020. Scotland is going further by setting an ambitious target of 50% renewables by 2020. Wind power will provide a significant proportion of these plans. Other countries have similar targets. In Denmark, wind power already represents 19% of their total energy provision and more plants are in development.

Wind power is a form of kinetic energy and of course one of the big benefits of wind power is that the energy is free at the point of collection. Wind energy can be transmitted by cable for immediate use or it can be stored via batteries or other storage devices for later use. New, improved methods of storage are becoming available. See below for more details.

Wind turbines onshore tend to be sited on ridges to take advantage of the faster wind speeds found in such locations. The downside is that they can be visible for miles, as a result.

A local community project near us has a small wind turbine which charges the phone and laptop computer. It is not powerful enough to boil the kettle unfortunately! Small, domestic wind turbines such as this are quite expensive to buy and install relative to the power generated.

You can even buy your own personal wind turbine from such outfits as B and Q. Unfortunately, these are not generally viable in an urban setting.

In some countries it is possible to sell electricity generated by windpower (and other renewables) back to the energy grid. The UK government increased the feed-in tariffs for home energy generation in 2010 so that small domestic outfits could obtain a profit from selling electricity.

Wind energy is classed as an "intermittent energy source". The winds that blow around our planet vary in strength and for this reason wind power is not as dependable as other sources of renewable energy such as geo-thermal.

Despite this, wind power is regarded as inherently reliable as weather patterns are relatively predictable over time. Large arrays of wind turbines are becoming more common and there are now plans afoot to link renewables together in a super-grid. This enables the surpluses from one form of energy (e.g. wind) to compensate for shortfalls from another (e.g. sun).

Most authorities do not see the intermittent nature of wind as a big problem; the power supplied by big nuclear and coal plants may also fluctuate, so the electricity grids are already organised to take care of such contingencies and more improvements in the supply and storage of wind power are ongoing. For example battery technology is improving

There is also a new development - 2012 - which allows wind energy to be stored for release when needed in the form of liquid air. The liquid air is contained and stored. When needed the energy is recovered and turbines can be powered to generate electricity. This will probably prove to be a huge leap forward for renewable energy credibility and will make the benefits of wind energy far more accessible.

This new initiative is a collaboration between Chengdu Air of China and a British firm. Such plants should enable energy from wind which is produced at off-peak times (e.g. at night) to be stored until needed.

One of the main criticisms of wind energy is that the turbines are ugly an cause environmental degradation as a result. New initiatives such as giant offshore arrays and floating mid-ocean rafts could well deal with most of this "nimbyism" (Not In My Back Yard - ism!); the need for on-shore wind farms could plummet if such arrays are successful.

Offshore developments currently represent only 1% of wind generating capacity. Clearly, if all goes well, this will continue to be a growth area.

The environmental hazards to wildlife, especially birds may be a more difficult bag of nuts to crack. Studies have shown that bird populations plummet in the region of wind farms. Some wind farms have been sited without due care for migration routes or habitat use (Altamont Pass in California, for example, where thousands of birds of prey were killed by poorly sited turbines.)

Even so, the RSPB (the Royal Society for the Protection of Birds, UK's largest ecological organisation) supports the plans for offshore wind farms because of the urgent need to tackle climate change. They now monitor thousands of applications for wind farms each year - and reject only a tiny percentage because of concerns for birds and other wildlife.

A summary of the benefits of wind energy

Probably more benefits of wind energy will emerge as we explore its possibilities and become better at using energy more efficiently.

Back to Green Energy - Solar Power for Homes

Benefits of Wind Energy - copyright 2012 Greenfootsteps.com Please do not copy without express permission. This site is protected by Copyscape

Other pages related to wind energy:

The main advantages of renewable energy 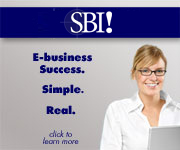