Blackcurrant Plants for Your Garden

Blackcurrant plants are a health-giving addition to your garden.

Blackcurrant plants are not hard to grow and are a welcome addition to any organic garden, if you have enough space. They deliver incredible health benefits but they are a bit space-hungry.

Black currant plants: what do they offer?

As everyone knows, blackcurrants (Ribes nigrum) are a fantastic source of vitamin C. You can supply three times your daily needs from just 100gm of the fruit. They are also a good source of potassium and iron.

They are also full of anthocyanins, those red/blue staining plant chemicals which have such a beneficial effect upon our health. They help prevent free-radical damage and are generally hugely beneficial; they are thought to help prevent and cure inflammation and may protect against heart disease and cancer.

They also have a reputation for helping maintain skin elasticity.

Blackcurrants were banned in the United States for many years as they were thought to carry a disease which affected pine trees (and therefore the highly-profitable logging industry). They are still proscribed in some states but are slowly making a come-back as their incredible health benefits become more widely recognised.

In Britain they were actively promoted during the Second World War as a substitute for oranges, which were generally unavailable. This left us with a traditional liking for sweet blackcurrant cordials which has had a rather bad effect upon the teeth of young Britons for the last two generations.

Blackcurrants are also popular in Europe; the French make the excellent liqueur "cassis" from them.

In Poland and other eastern European countries a dessert dish called kissel is sometimes made using milk, arrowroot and sour berries such as blackcurrants.

Blackcurrants like deep fertile soil which is well drained and plenty of sun.

You can get away with a little bit of shade, however but the crop may be less - and less sweet. Shelter is good but you also want to avoid frosty corners and damp spots when you choose where to put your blackcurrant bushes.

If your growing area is very sheltered it will be best to go for a mildew-resistant variety such as Ben Tirran. If you have space, you can select several varieties for a longer harvesting period.

There are now smaller varieties available such as Ben Sarek which suit the small garden. You can also buy blackcurrant plants which have quite large, sweet fruit, making them more of an option for serving fresh. Ebony is a new variety which has been developed to cater to our sweet tooth!

Prepare the soil well before planting and allow time for the soil to settle. Make sure that the area is weed-free.

Incorporate plenty of well-rotted compost, manure and soil nutrients such as blood fish and bone.

How much space do you need?

Blackcurrants are usually grown about 2 metres (6 feet) apart, so they are quite space hungry. They don't need any support.

If your blackcurrants are bare rooted then they must go in the ground in late autumn or early winter when soil conditions are damp and the plant is dormant. If you buy your blackcurrant plants in pots, then they can be transplanted at almost any time - but avoid very hot, cold or dry periods.

Blackcurrants grow from "stools" - which simply means that the root sends up shoots below ground, so that it looks as though there are several small plants close together. For this reason it is important to set the plant reasonably deep in the soil so that the shoots are protected and encouraged to sprout. Set them about 2 inches deeper than in the pot for best results.

After planting you cut back all the shoots to just above ground level. This stimulates new growth when the spring warming takes place.

Blackcurrant plants like a nitrogen-rich environment so supply them with a good mulch of well-rotted manure or dress the soil with blood fish and bone in spring.

Blackcurrants need the usual pruning of dead, diseased and damaged shoots and branches. You also need to thin crowded areas of the plant. other than that, it is a good idea to cut back the wood which has just borne fruit in the autumn. Cut it back to ground level and this will stimulate new growth for the year after next. blackcurrants bear fruit on two-year-old wood.

A pruning regime can be established where the older wood is cut back and enough two-year-old wood is left to bear fruit.

Collecting the fruit can be combined with some pruning if you like. This means that you cut down the wood with the best fruit on it and then remove the fruit thereafter.

Looking after your blackcurrant plants is quite easy, once they are well established. Give them a mulch of good quality compost about once a year, in spring, and make sure that they are kept free of too many competing weeds. A thick mulch of organic material will also help to cut down on the need for watering.

I've never had to water my blackcurrants but if you live in an area with low rainfall or frequent dry conditions you may have to resort to some watering.

Water your blackcurrant plants in the early morning before the sun heats the soil. Water them generously but no more than necessary.

Unfortunately, birds can be a bit of a pest. I like to leave them one or two bushes to enjoy, unnetted, though whether this increases the competition from birds I could not say.

Garden netting is pretty much essential if you want a good crop. I don't find that blackcurrants are quite as popular as red currants but they do suffer some losses gradually.

Please see the page on garden netting for general advice on netting choices.

Blackcurrants can be a bit slow to pick. I tend to strip whole swathes with thumb and finger - but you need to be careful not to damage the fruit. I've heard that if you take off whole bunches or twigs and freeze them, the fruit will easily separate from the stalks.

Unfortunately blackcurrants do not keep so well, which is why most of them end up as cordials, wines, jams and puddings.

They freeze quite well, though and you can keep them in a chill cabinet of a fridge for a few days provided that they are not squashed for space.

Keep an eye out for pests and diseases.

Blackcurrants are susceptible to a virus which is carried by the Blackcurrant gall mite or big bud mite. It can be a serious pest in commercial crops. It causes the affected buds and leaves to swell and become disfigured. The plants affected will tend to crop less well. It is not easy to treat or cure and affected plants are best destroyed.

New plants from reputable garden centres should be certified as virus free.

The main insect pest that I've noticed is aphids. A good organic, mixed food growing area should ensure that you do not suffer too much insect damage. Companion plants will help attract the right kind of insects to keep the baddies down. Keep the soil around the plants free from weeds and detritus where pests can hide.

One of the nice things about pruning is that you can use some of the off-cuts to grow new plants. Blackcurrants will root relatively easily from hardwood cuttings taken in autumn when the plant has lost most or all of its leaves.

Blackcurrant Plants for Your Garden

How to grow blackberries - and why

How to grow raspberries 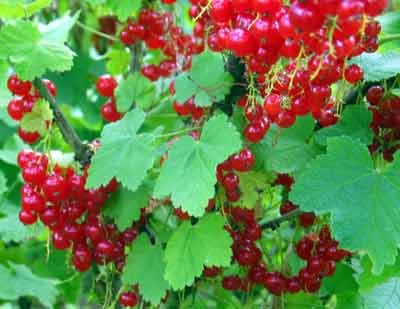