Bicester Eco Village
- a plan for an eco-friendly community

A modern eco village is set to change the Oxfordshire landscape!

I'm sure many of us would love to live in a real eco home - one which has a low or non-existent carbon footprint and which is packed with low impact features.

Here is a guest article about the new Bicester Eco Village in Oxfordshire, England.

Just how eco-friendly such a scheme as this may really be will emerge in the next few years as the scheme is put to the test by real people living their lives. If you are curious as to how such a scheme might work for you, here are some details.

This article was provided by http://greendealshop.com/

Please note some readers may consider this article as advertorial.

No money was paid for the article but the interests of the writer may be served by some aspects of the article, for example, by outgoing links. 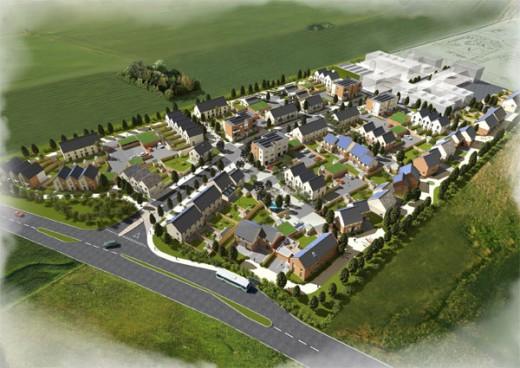 Over the past few years we have experienced a monumental shift in attitudes towards climate change and environmental consciousness. With financial schemes such as the Green Deal and the Renewable Heat Incentive, it’s not only become easier to live more ethical lives, but also a more viable financial option. Yet these two government backed schemes are just the tip of the iceberg when it comes to green developments.

One of the most exciting current developments is the Bicester Eco Village, announced earlier this year. Just outside of Oxford, the plans for this new area have been brewing since 2009 with the dream of creating purpose-built energy efficient homes and communities for a sustainable future.

Below we’ll be looking at some of the things you should know about this incredible new project.

What is an Eco Village?

An eco-village is a community that produces zero carbon emissions and complies with the UN sustainability requirements.

The building group behind the project, A2dominion, have begun construction on the project and are hoping to create up to six thousand new homes in Bicester. Included in this will be a primary school, eco - pub, retail space, eco- businesses and even a community centre, all offering a zero emissions alternative to the way we currently produce energy. An important aspect of this is that the town will still retain 40% green space, including allotments, maintaining a great level of biodiversity and providing ample outdoor activities.

The project is currently in its first phase, where three hundred and ninety-three high efficiency homes will be constructed alongside a combined heat and power plant, producing completely renewable energy that can be exported to the national grid. Perhaps one of the most fascinating parts of the whole development is that the building plan will produce zero materials to send to landfill over construction, a feat that hasn’t been acheived other than in the 2012 London Olympics. 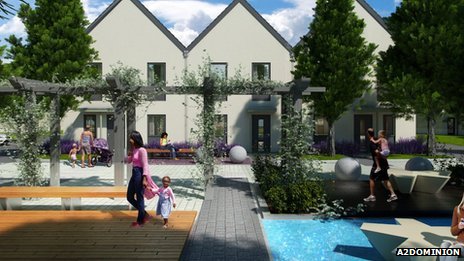 Where is the Bicester Eco Village being built?

The development is being built in an area to the northwest of Bicester, a village just outside of Oxford. This area is one of four that have been earmarked across England for such work, and has been organised in close collaboration with the Bicester Town Council and the Oxfordshire County Council, offering full support for an overall more sustainable community.

With a code level five of sustainability, the town hopes to act as an example of how future construction should be carried out, with more areas of the country to follow on from the predicted success. The sustainability code system is a government scoring system between one to six stars, and code five means that it is a completely zero emission home in regards to building regulation issues.

How will the eco village run?

There are a number of ways that the eco-village is being powered, but it will mostly run through the Solar Photovoltaic Panels that will be installed on all of the buildings in the town, alongside the energy produced by the town’s combined heat and power station. For years, Solar PV was considered inefficient in the overcast British skies. However, innovative research and development has changed the view of the public and now these panels can produce energy with even minimal sunlight.

Alongside the decreasing price of solar PV, it’s not just a viable option for eco homes, but also for domestic and commercial properties throughout the UK. It is predicted that the average 34m2 panels installed on each property will not only be the UK’s largest residential PV array, but will produce enough electricity to power 550 homes. Taking into account that any unused electricity will be exported to the national grid, the town looks set to not only create energy to power itself, but also other parts of the country.

Just imagine if every home in the country had solar panels installed. Not only could we power our own homes and buildings, but we could even export our excess electricity!

Whilst optimising our buildings and homes provides a valuable way to reduce carbon emissions and improve energy efficiency, don’t forget about transport. A massive amount of our personal transportation releases carbon emissions, thanks to the use of fossil fuels such as petrol and diesel to power cars and public transport. With the specially designed cycle and pedestrian routes, the eco-village has big plans to encourage greener travel.

Not only will this make it safer and more enjoyable for cyclists and walkers, but there will be a bus service within four hundred metres of each home for those who need to take longer journeys. There will also be charging points for electric vehicles and a number of social initiatives such as an electric car club.

With the increase in sales of hybrid vehicles and electric cars, the eco-village is prepared to cater for those hoping to further reduce their carbon footprint by travelling green.

When will the eco village be built?

Construction began in the area on January 2014, in phase one of the planned construction. Originally, it was planned that residents would move in towards the end of 2013, but due to pushing back the construction date (the recession causing a delay on the proposed plans in 2009), it is expected that residents will move into the first homes in Spring 2015.

However, the construction of the project will not be a short term effort, with plans for the development to take place over the next twenty years. This is because not only do they want to continue to sustainably build the highest quality of efficient homes and public buildings, but the development company also wants to produce a lasting community for the future.

Can I move in!

With such an exciting development, who wouldn’t want to be part of the UK’s first eco-village? Unfortunately, however, we’ve been unable to find any information of price or who is eligible to move in to the new green space. For further information it might be worth checking the a2dominion site closer to the time, or contacting the local Bicester Town Council.

It is anticipated that the first residents will be from the local area, but only time will tell what the demand for eco living from those across the country, and possibly the world, will lead to.

This eco-village looks set to be one of the most exciting green developments in the country, if not all of Europe. For years the UK have trailed behind in their steps towards becoming energy efficient and reducing carbon emissions. This commitment by the UK government looks to shorten this deficit.

With 2020 drawing nearer and nearer, only time will tell if the village will be a success, and whether we’ll meet our carbon reduction goals.

What do you think of the eco-village? Have you already packed your bags? Let us know in the comments below.

What are the downsides to new eco-town developments such as this? One criticism is that the new influx or residents creates problems for local transport and infrastructure.

It appears that the Bicester eco village is only a a part of a massive new development around Bicester - up to 1300 homes are planned in a new garden suburb. This has already provoked debate and argument as to the effect upon this small market town. It will be interesting to see just how effective this proposed development will be and just how well it integrates into Oxfordshire life.

If this is not your bag, building your own bespoke dwelling might be the answer. For info on building your own eco home try this book from Amazon: The Green Self-Build Book: How to Design and Build Your Own Eco-Home. For most of us, myself included, doing the best with what we already have is the way to go! Read on in this home improvements section for more ideas on making your own home an eco home.

Moving to a new house - some green moving tips

Decorating with natural materials for a beautiful home