Global Warming Cause and Effect - Not One but Many!

Global warming cause and effect: The main cause is us and the main effect is climate change!

Since Al Gore's movie, An Inconvenient Truth, the political consensus on climate change appeared to be changing.

Everybody knows about climate change these days and more and more scientists (over 97%) agree that it is an established fact, not just a paranoid fantasy dreamed up by environmentalists.

If we are going to successfully stop global warming, it is important that we all understand how it arises.

The main causes of global warming

Briefly stated, these are the facts (for anyone who has been visiting Alpha Centauri for the last twenty years!)

Climate change is occurring because of pollutant gases from industry and transport.

These gases cause global warming by entering the atmosphere where they wreak havoc with the heating and cooling system of the earth. This in turn upsets the weather systems of the earth.

See below for more details of the causes and effects of global warming. You can also find more details by checking the Green Links page. There is also more global warming information in this section, particularly in the Carbon Neutral page.

What are greenhouse gases?

And which greenhouse gases are causing global warming?

Greenhouse gases are gases which cause a gradual heating of the earth's surface when they are released into the atmosphere.

Climate change is being caused by common greenhouse gases such as carbon dioxide, methane and nitrogen dioxide. Although these gases occur naturally, we humans have increased the amounts of them in the atmosphere by our activities. These are the three most important greenhouse gases. There are others, such as halogens, which cause significant damage, too.

What makes them "greenhouse gases"?

Gases such as CO2 result from activities such as the burning of fossil fuels. These gases rise in the atmosphere to form a layer in the upper atmosphere. This works like a blanket around the earth, trapping more warmth than normal in the lower atmosphere.

What are we doing that causes greenhouse gases to be discharged?

Carbon dioxide is spewed out by your car (and mine!) every time its engine is on. Both diesel and petrol cars emit carbon dioxide. Diesel vehicles were promoted until recently as the better of the two but it now appears that a good deal of the data was faked.

Industry too is responsible for huge amounts of carbon dioxide emissions, as well as other man-made greenhouse gases such as halocarbons.

Nitrogen dioxide (NO2) is produced by road traffic and many industries when they consume fuel. It also results from aviation fuel being burnt with every aeroplane flight. It is the gas which is responsible for the faint reddish-brown haze sometimes visible over populated areas (see picture below).

It is also a health hazard in its own right. It is responsible for many respiratory complaints and it worsens the effects of some allergens such as pollen. If you are a hay fever sufferer, or if you are asthmatic, you are at greater risk when there is nitrogen dioxide in the air around you.

Methane is emitted by livestock such as cows - and by our good selves - as part of the digestive processes. Landfill sites (rubbish tips) also emit methane gas as organic waste decomposes. Because of our reliance upon intensively reared meat, the amount of methane emitted has risen in recent years.

Methane is a very potent greenhouse gas. It traps heat in the atmosphere 20 times more effectively than CO2, so although there is less of it, it is a very real contributor to global warming. Cows chewing their cud emit methane. Intensive stock rearing may be accounting for around 6% of global warming, according to the UN. That is not including the carbon released when virgin forests are cut down to make space for more cattle ranches.

Picture above: Industrial pollution and traffic pollution form a heavy visible smog over the Mediterranean

Climate change and the weather 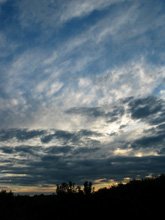 Global warming cause and effect: What are the effects of greenhouse gases on the weather?

According to the IPCC (The Intergovernmental Panel on Climate Control, an international body,) there is a broad consensus amongst scientists that greenhouse gases released through human activity are causing climate change.

What is not agreed, though is the scope and extent of the resulting climate change.

Here are some of the main effects of greenhouse gases on the climate as we understand them today.

The average temperature of the earth's surface has risen over the last century by 1 degree Fahrenheit (0.6 Centigrade) and further rises are ongoing. This is based on the temperature mean (average) worldwide.

Environmentalists are hoping that the climate can be stabilised at 2 degrees warmer without irreversible damage to the weather systems. Unfortunately, there is nothing certain about this.

Some experts predict that we may be causing damage which will lead to temperature rises of 6 degrees world wide before the end of this century. If that were allowed to happen it would be catastrophic.

The effects of greenhouse gases upon the weather are complex and vary widely, depending upon where you are in the world. There will be (and already are) more extreme weather events, from heatwaves to hurricanes and from droughts to floods.

Here in Europe summers are hotter on average than they were. In 2003 35,000 people died in the summer heatwave which brought temperatures of over 40 degrees Celsius to some areas. Flash floods are commoner in winter. In Africa droughts are becoming more common. Japan is becoming warmer and scientists are modifying the rice strains sown so that yields are not adversely affected. Hurricanes and typhoons are larger, stronger and more frequent and are now occurring in some areas where they have never been seen before.

And it's not just us that's affected - wildlife is affected too. Here's a short video showing the plight of just one species affected by global warming - the polar bear.

As countries become warmer, seasons are affected in unpredictable ways. This can result in breeding problems for some insects when their young hatch but the food species they depend upon are not yet ready. Many species depend upon this type of synchronisation. Climate change can wreck systems that have evolved over millennia.

Other effects of greenhouse gases and global warming include changes in the world's oceans and ice sheets.

The oceans act as massive carbon sinks (i.e. they absorb a huge amount of carbon dioxide). This makes them more acidic which affects marine life such as corals. Huge areas of coral reef are now dying as the water they live in becomes too acidic to support them.

As the land and ocean temperatures rise glaciers, polar ice caps and Antarctic ice shelves are melting at unprecedented rates. This causes rising sea levels. Further global warming is caused because ice reflects sunlight rather well; when it goes the relatively dark ocean and land masses which are exposed to sunlight absorb more heat than the ice they replaced.

Other areas are affected by increased drought and even desertification. The increased land temperatures mean that moisture is sucked out of the soil, leading to arid conditions which are hostile to life. The rate of global desertification has more than doubled in the last thirty years.

This can have serious consequences for many counties where people are dependent upon subsistence agriculture. Lake Chad in Africa has almost disappeared.

It can be hard to get an idea of how much carbon is being pumped out into the atmosphere by our activities. Here is a handy way to visualise what is going on in New York as emissions from buildings, industry and traffic climb:

What can we do about climate change?

Many of the causes of climate change are very complex. Economic and political considerations will certainly be vital in the long run.

This web site is not about the political choices which face us but simply focuses on what we as consumers and ordinary people can do to help.

However, we can all play a part in slowing the damage to the planet's climate systems.

Watch this neat video from 350.org:

If you find the number 350 popping up in many places, you now know why! It is part of the fight to contain and reduce global warming causes and effects.

More information on global warming cause and effect

For more detailed information on climate change world-wide see The World Wildlife Fund pages on global warming and climate change in the links page. They also have a campaign to help the polar bears threatened by climate change.

There are also several sites which allow you to calculate your carbon emissions and even off-set some of your energy requirements by purchasing trees. Please see the links page.

Global warming cause and effect: Is it a hoax?

Think it's probably a hoax, or bad science? Keep thinking...harder! There is plenty of hard scientific evidence out there. Yes, there is a faint, faint chance that the scientists have got it wrong. But with 97% of climate scientists believing that we have a problem, let's not waste time waiting for them to be proved right!

". This covers much the same ground as the movie but has some quite detailed explanations of some of the science underpinning our understanding of global warming.

by Leonardo Di Caprio. I've heard it is more visually interesting and accessible than Al Gore's film but just as thought provoking.


Here's a short video from Greenpeace about the arctic and how big oil companies now hope to exploit it - causing yet more global warming and climate change.

Global Warming Cause and Effect TOP

Cause of land Pollution