Identifying Weeds - from K to Z

Here are more weed pictures for easy identification. Identifying weeds - at least the common ones is essential for gardening success. One of the biggest tyro errors is pulling up perfectly good plants. Get to know your enemy - from seedling to invasive, throttling monster!

Of course, as we all know weeds are not the enemy - just perfectly good plants in a place we don't happen to want them. 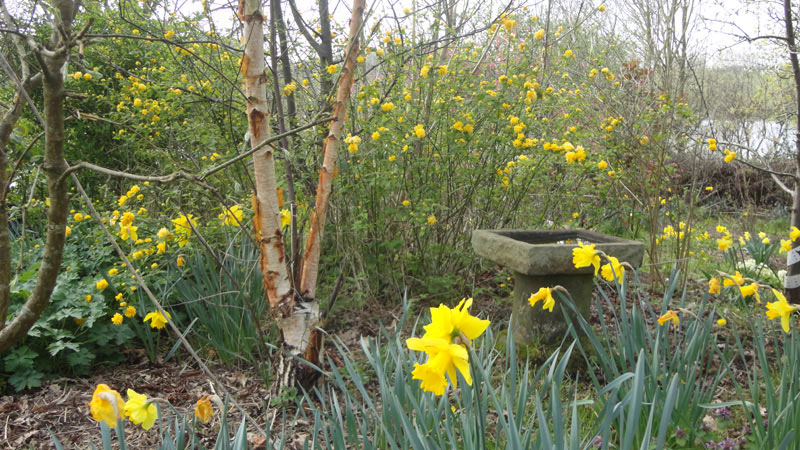 No plants starting with K as yet - though I could make a case for including Kerria japonica Pleniflora (Bachelor's buttons) which is a beautiful flowering shrub which freely suckers and pops up all over the place, as you can see from this picture. I took a small cutting from a friend's garden some ten years ago and now it is almost everywhere in this bed. Fortunately it has not stopped the daffodils from blooming! 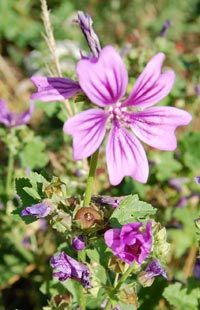 Common mallow is a large plant with medium-sized pink flowers. It is related to Lavateras which feature in many larger gardens. They are also known as tree mallows. Common mallow is indeed common and likes hedgerows, grassland and and well-drained fertile soil almost anywhere. It grows widely in most of Europe and Asia.

Common mallow is quite tricky to remove once they get larger than a seedling. They have deep tap roots which may need digging out; lovely if you can keep them in the hedgerow. They can grow to a metre or more at maturity.

Mallow is used in soup in the Middle East. The leaves are glutinous, so they add body. If you try this, use the young leaves. You can also eat them raw. I often use mallow leaves in soup and stir fries as I don't like to kill such a beautiful plant unless it's growing in a really awkward spot.

As with other deep-rooted plants, they will gradually help soil fertility as they bring up nutrients from the subsoil. You can cut them back harshly and add the trimmings to the compost pile; most mallow plants will survive this treatment.

Picture, above right: Mallow has a pretty flower with striking deep pink stripes. The plant soon becomes large and woody. 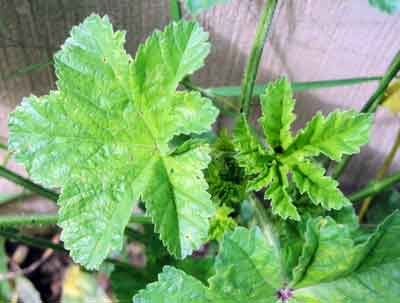 Picture above: Mallow leaves are attractive and distinctive 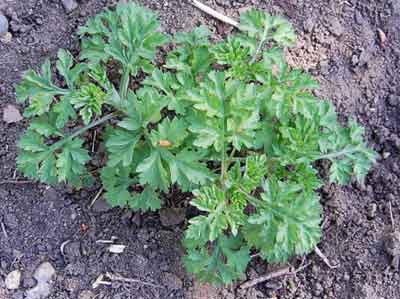 Picture above: Mugwort grows quickly and strongly in spring

Identifying weeds such as mugwort is easy once you "get your eye in". This is a big, pushy plant that looks a little like a crysanthemum at first glance when it is young. It has a medicinal odour if you rub the leaves. It is quite deep rooted and the leaves are dark green with silvery backs when mature.

It can be eaten but is not particularly attractive. It has known herbal uses, including regulating menstruation and it is regarded as unsafe to take during pregnancy. It is closely related to wormwood.

Mugwort is difficult to eradicate once it becomes established. I tend to root it out whenever I spot it as it is rather hard work; the deep roots are very tough.

Mature plants look quite striking and the seed heads have a feathery appearance but it is a massive space hogger which most people will want not want in the garden. The seed heads may have some use as fodder as they are mealy and rich in protein. You can also use the leaves to create an insect repellent spray but it also thought to be a growth inhibitor. 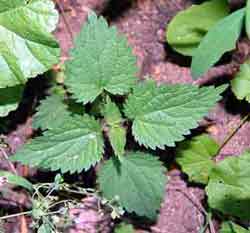 Picture, above: Young nettle seedlings can be hard to spot and deliver quite a sting for their size!.


This one garden weed needs no introduction, I'm sure!

Nettles are a sign of good fertility but annoyingly persistent with travelling rootlets so they spring up in new places. They pull fairly easily by hand (gloved, of course!) If they are travelling in from a neighbours patch a physical barrier such as slates buried in the soil a few inches deep will help.

The smaller annual nettle is easy to pull and does not throw out suckers.

Drown them in a bucket of water for a useful fertility aid for the garden. This will get a bit smelly after a few weeks but at least the nettles will be harmless. Water your plants with the "juice" diluted in more water. 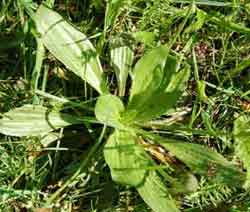 Identifying weeds, picture above: Broad-leafed plantain or Plantago Major. Plantain have broad or narrow leaves with prominent veins. Another plant for the salad box - though I can't say I rate them.

This species has nothing to do with the large banana-like fruit except the name.

Plantain is common in grassland and there are several common varieties, some quite big. It is easy to pull or hoe when small.

The narrow-leafed ribwort is easy to spot and easily establishes itself in borders.

The broader-leafed plantain (Plantago major), sometimes called waybread, I have not seen in my garden except for in established lawn areas. It was called waybread by the Anglo-Saxons because of it tends to be common on or near paths and it is edible. 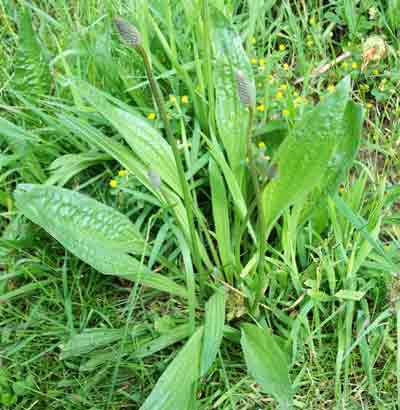 Picture above: Narrow-leafed plantain or ribwort 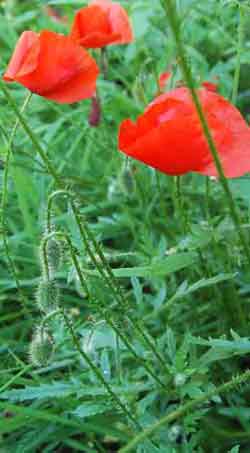 You probably need no help identifying weeds such as poppy - when they are in flower.

Poppies look amazing and are great gap-fillers. Nevertheless, they do tend to take over. Pull them by hand or hoe them. They are easy to remove until they get big.

Poppy seeds can be collected for culinary use, though it is a slow process.

Picture, right: Poppies are colourful but sprawl and out-compete other plants.

This plant is a menace as it seeds so readily and will grow almost anywhere. The Latin description oleraceous indicates that it is considered edible but for most palates it is impossibly bitter. It is related to lettuce. The sticky white sap that oozes from broken stems is particularly bitter. Fortunately rabbits and other stock animals enjoy it. If you want to try eating it use very young tender leaves and mix it with other less astringent ingredients.

Mature plants can become quite large and hard to pull up. It is easy to uproot while it is still small. Try not to let it seed as it is a most prolific source of wind-borne seeds. 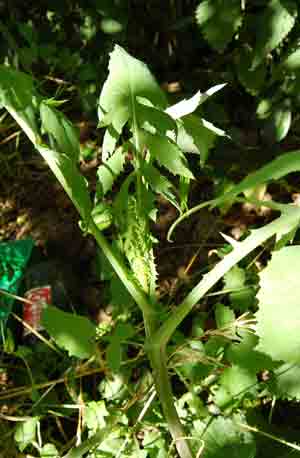 Picture above: The leaves are sharply serrated. 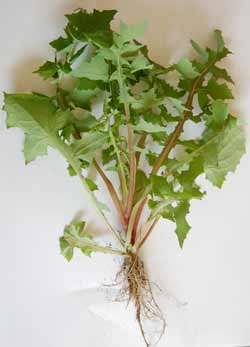 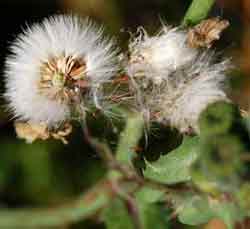 Picture, above: Sow thistle seeds, ready to blow onto the garden!

Spurge is a pretty plant which is easy to pull by hand. It is poisonous. It is well worth weeding it out carefully from anywhere that you mean to grow salad plants.

Thistles come in many varieties. The worst are large bossy and deep rooted.

Pull vertically from directly above as soon as you see them. If the root snaps, dig it out. Don't let this one seed! You are likely to need gloves for all but the smallest specimens. Identifying weeds such as thistles is easy but the exact variety you have may take careful work to identify. 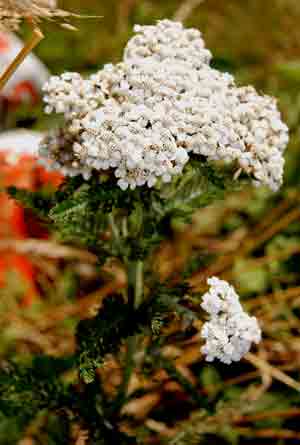 Yarrow or Achillea is a useful and pretty weed which is often sold in garden centres. The wild variety is usually white though sometimes you see pink ones.

It becomes a bit tough to pull when fully grown.

You can use young yarrow leaves in salads. You can also make a refreshing tea from the chopped leaves and stalks and flowers.

Identifying Weeds from A to J