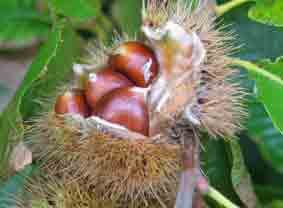 Sweet chestnuts can be a delicious and easy source of free food.

Roasting chestnuts and eating them by the hearth is perhaps the easiest and most agreeable thing to do with them.

If you are a wild food fan, you may want to explore further and tackle some chestnut recipes.

Here are some easy chestnut recipes and facts about chestnuts as a food source.

Wild chestnuts are available in mid to late autumn in parks and woods almost throughout the world.

Chestnuts originated in Asia Minor and the Romans spread them around Europe as they conquered and colonised. There are different varieties of edible chestnut in Asia and they were cultivated in China and Japan from the earliest times.

In North America the American Chestnut was practically wiped out by chestnut blight in the early twentieth century. Now efforts are being made to re-stabilise it as a species by careful crossing with more resistant Asian varieties.

Chestnuts have a lot going for them as a food source. They are rich in nutrients such as starches and sugars. They are very low in saturated fats and contain virtually no cholesterol. The protein content is also surprisingly low. They even contain moderate amounts of vitamin C. They store reasonably well.

Chestnuts make an acceptable flour which can be used as a substitute for cereal flours. Best of all they are delicious.

Harvesting chestnuts is easy and fun if you are harvesting small amounts. The prickly outer shell (the "burr", visible in the picture at the top of the page) needs not provide much of an obstacle to their enjoyment; just roll your foot over them gently and most ripe ones will simply pop out of the green outer layer.

If you visit a place with several trees to choose from you are reasonably certain to find ones which have popped out by themselves. Sometimes you need to scrabble about in the leaf-litter around and beneath the trees to find the best ripe nuts.

If you are harvesting chestnuts in an area where there are many trees, the biggest ones are often to be had on the edges of the plantation - because of the higher light levels and lower competition for growing space.

Avoid chestnuts that have splits or holes in them and any which are very small. Split ones may be OK if you are going to use them soon. Older ones look darker and may have already dried some and be rattling in their shells. The best ones are large and glossy chestnut brown. They darken quickly with time. Older ones may be fine, too.

Children usually enjoy foraging for them as part of an autumn walk. Stout shoes and gloves are a good idea as they can be extremely prickly when in their burrs and it's always temping to try to pick them up! 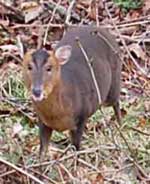 Don't forget if you are out in the woods to leave plenty for the wildlife. Jays and squirrels like them and store them for the winter. I've even seen a muntjac hanging about in our chestnut patch, so maybe they eat them, too.

You can eat chestnuts raw but they are rather acidic and likely to disagree if you eat more than a few.

I find it's quite easy to peel them while they are fresh so I often end up peeling them as I walk on the way back from harvesting them. Fresh chestnuts have fairly supple outer skins which can be peeled off in a few seconds.

Preparing roasting chestnuts for use

The inner brown shell is a second tough barrier to be overcome after the burr. Most cultivated varieties have a tough shell which can be difficult to remove effectively. For most people simply roasting chestnuts whole in their shells is the easiest solution.

If you peel off the outer shell when the chestnuts are still fresh they can be reasonably easy to process. A small sharp knife is an asset for starting the process - otherwise, strong nails!

Older, stored chestnuts may be opened with a little help from a nutcracker (This only works when they are really dry i.e. after a few months or weeks.)

This pan for roasting chestnuts looks good and durable.

Another method is to boil the chestnuts in water for a few minutes and then peel. To do this, you need to wear rubber gloves because it's important that the nuts stay hot. Hold them in a cloth to prevent them slipping away and use a sharp knife to slit them open and remove the peel.

The inner skin should also rub off too. (This is a fine light pinkish brown.) It can sometimes be hard to remove.

If you have time on your side you can soak the chestnuts in hot water for a few minutes or longer, let them cool and then peel them. Here you are not letting them cook - just softening the skins. Once you have peeled them, you then need to cook them.

If all this sounds too much like hard work, you can buy dried peeled chestnuts in many delicatessens. They are also available in tins.

All the above methods of getting chestnuts out of their shells are not really needed for roasting chestnuts - more for using them in other recipes.

Here's how to roast chestnuts whole.

Roasting chestnuts on the fire or in an oven

Roasting chestnuts is very easy. You don't need to peel them for this. Pierce each shell with a skewer, or slit it with a knife. This stops the shell from exploding as the chestnut heats up and expands.

Throw away any that have a hole in the side. Some other diner got there first!

Put all the nuts into a heatproof dish such as a large bread tin or a roasting pan. Add one medium-sized chestnut which is whole (not slit). This one will explode noisily in the oven or the fire and tells you that the chestnuts are ready to eat. You might prefer to put a lid on the dish to save the inside of your oven from being splattered.

If you prefer to avoid explosions altogether, you can take a little longer to prepare the chestnuts. Instead of just pricking them, or slitting them, carefully cut into the top of the chestnut twice in an X shape. It's best to give them plenty of room as a single layer on a tray; don't just pile them on top of one another.

The temperature you need for roasting chestnuts isn't too critical around 350 - 400 degrees is good. They usually take around twenty minutes or more to cook, depending upon the size. We usually just put the oven on full. In an open fire put them in a sealed fireproof dish, or wrap them in tinfoil and put them at the side, in the embers.

If they look greyish when cooked they have probably gone off. They should mainly be a warm buttery yellow or creamy beige colour. However, there are usually some greyish tones, so don't be too easily put off! Black tones are not a good sign!

The easiest way to eat them is to use a knife to cut them open and a teaspoon to scoop out the flesh. If there are any left over afterwards, it's best to throw them out; they seem to lose their subtle floury texture if they are re-heated.

You can also boil chestnuts to cook them before adding to a recipe. Boil them for about fifteen to twenty minutes in enough water to cover them. If you want to steam them slice them in two first.

Once you have boiled chestnuts, it is easy to slice them open and scoop out the flesh with a teaspoon. Store the cooked chestnuts in the fridge until you want them. You can fry them in a little oil with onions or anything you like. They are just as delicious as roasted chestnuts and really rather more versatile.

Chestnuts work well with all manner of other foods. Use them with meats such as rabbit or pork, use them as part of a stuffing, or use them as a side dish. The French use them for the famous "marrons glacés" which is a complex sweet eaten at Christmas which involves about 20 different processes.

Chestnuts are easy to add in as a part of a stir-fry dish. Pre-cook them in their shells and cut them open with a sharp knife. Just add them close to the end, as they are already cooked.

Another method - which I now use for preference - is to peel the chestnuts and slice them thinly or chop them into small pieces. The inner skin will usually slough off as you slice. Add the chopped chestnuts to the stir fry. Allow about ten minutes for them to cook through.

If you are cooking chestnuts with a meat dish add them about one hour before the end of the cooking time. Just add the whole peeled raw chestnuts in with the meat and other ingredients.

If you can't find good roasting chestnuts out in the woods, you can always buy them on-line. You can get everything from the most refined chestnut products such as candied chestnuts, to big packs of dried shelled chestnuts such as these from Parthenon foods.