The Best Solar Ovens for Home Use

Solar cookers: Here are some pros and cons of the different types for use at home.

Why Buy a Solar Oven?

A solar cooker is a great way to cook for free. That is to say, once you have made your initial purchase, you are free to cook at will – or at least when the sun shines and it does not cost you a dime!

There's a whole range of foods which can be cooked in a solar cooker, from soups and stews to bakery goods. The possibilities are almost limitless. A solar cooker can be quite a practical solution to cooking outdoors, at least in summer.

You do not necessarily have to buy a solar oven. You can make your own solar oven for a modest cost, if you have the patience and a little technical skill. The equipment needed for a simple cooker is not expensive; in fact you can use mainly scrap materials.

Here’s a look at some of the solar ovens now available. There are a lot of different models but most of them fall into one of three distinct types.

As the name suggests, a box cooker is a simple box-shaped receptacle in which the items to be cooked are placed. The sun’s rays are concentrated by panel reflectors into the box. The panels may be situated in the lid of the box or can be entirely detached from the box.

A box cooker is quite versatile in that you can cook both wet and dry, even at the same time, (though not in the same container, of course!) If you are baking a cake and creating a stew, then these two items can sit along side each other in their respective pots or tins, provided that the cooker is big enough to accommodate two items at once.

Temperatures inside a box cooker can get surprisingly high, so cooking times might need to be adjusted on a trial and error basis. Most solar cookers do not usually manage temperatures above 350 degrees Fahrenheit, so temperatures tend to be lower than those recommended in cookery books for some things. Nevertheless, you can cook almost anything in a solar oven with a little practice.

You also need a black or dark cooking pot as dark colours absorb heat. Some companies supply these with the solar cooking kit. Thin-walled pots are also best because heat is transmitted more quickly.

A panel cooker is probably the easiest one of the solar oven designs to try at home. They are made up of reflective metal panels which concentrate the sun’s rays to a point in the centre of the panels. There are usually three or more panels surrounding a central area where the pot to be heated is placed. Again, a black or dark-coloured pot is needed to absorb the heat.

Because there are a number of panel surrounding the pot, there is less need to constantly adjust the cooker as the sun moves.

The parabolic solar cooker is a more sophisticated style of oven. A parabolic lens concentrates the suns power just where it is needed but because the hot spot is so defined, the lens needs to move with the sun. If this is not automated you have to spend a lot of time adjusting your cooker to follow the sun.

Parabolic lenses have been in use since the 1950s at least. The Indian National Physics Laboratories developed one for mass production, according to the Illustrated London News, in 1952. Their one was teamed up with a pressure-cooker for extremely fast results.

Solar ovens can also be created with the help of a Fresnel lens. This is an exceptionally powerful lens made from either glass or acrylic.

The cooker shown above is suitable for camping and RVing and can even be used for drying and dehydrating fruit. See Amazon for more.

Safety when using a solar oven

Anyone who has messed about with a pocket lens in sunlight to produce a flame will know how powerful the suns rays can be once they are concentrated.

Care should always be taken to keep body parts out of reach of concentrated sunshine. If you are cooking outside always be vigilant that you do not inadvertently cause a fire by careless positioning of a lens or reflector.

To avoid burns and exposure of your eyes to very bright light it is best to wear dark glasses and use oven gloves when working with your oven.

Keep young children and animals well away from the cooking area.

Solar ovens and the developing world

Solar cookers are being promoted extensively in the developing world as they offer a cheap and sustainable approach to cooking for families where energy supplies are expensive or difficult to obtain. They are cleaner and healthier than traditional methods of burning wood or dung to fuel a stove. They are also more sustainable as there is less need to fell trees for fuel.

The World Wide Fund for Nature (WWF) is now supporting the introduction of solar cookers into parts of Asia, with the aim of reducing habitat loss. An enormous number of trees are felled each year for fuel in the Terai Arc, a forested area on the borders of Nepal and India. This constant depletion of the forests has a knock on effect on species such as tigers and rhinos as their living space dwindles year on year.

In the developed world a solar cooker is a valuable asset for any family as it makes outdoor cooking a pleasure and offers another way to cut fuel costs.

There are lots of designs available if you would like to make your own solar cooker. You can use many materials from aluminium foil and cardboard up to more elaborate designs involving commercial lenses or reflectors.

Possibly the best starting place for constructing your own homemade solar oven is here: http://www.solarcooking.org/plans/

This is not something I've done yet... but I have plans to try making one from scratch. Watch this space!

So, which is the best solar cooker for home use? The answer depends of course on your needs and budget. Most commercial solar cookers are quite pricey, especially as, for most of us, this will be something for occasional or summer use.

There are cheap versions made from aluminium and cardboard available but they are unlikely to be particularly robust and will not achieve the higher temperatures that more sophisticated models manage. These will be suitable for camping and picnic use but not much more.

If you want to do some serious cooking, then look to something more durable such as the Global Sun Oven - Solar Cooker which has received some excellent reviews.

Other pages which may interest you: 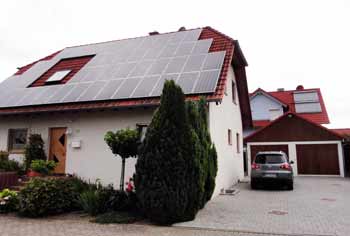