Green air travel is really a myth - just because every form of mechanised travel has a carbon cost and so has an effect upon the planetary climate.

The carbon footprint of air travel is considerable. Calculations of the amount of CO2 released to the atmosphere vary. It's probably safe to say that around 2.5% of global emissions are caused by air traffic. And the percentage is rising - except for during the Covid 19 pandemic, when air traffic has fallen worldwide.

Air travel also results in other greenhouse gas emissions such as methane and is a potent driver of climate change. There are concerns that gases are released high into the atmosphere where they interact with ozone and other gases to provide further climate effects.

Even so, there are a few things we can do to help make even air flights greener. This page takes a look at some choices for more eco-friendly air travel. 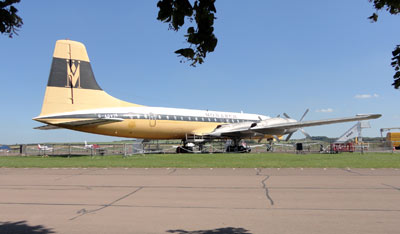 The way we were: 1960s aircraft Bristol Britannia 312 seen at Duxford Air Museum in Monarch livery

Air travel accounts for less than 5% of greenhouse gas emissions globally, according to the IPCC (The Intergovernmental Panel on Climate Change).

In some parts of the world the percentage of emissions from aircraft is far higher: 6.3% of the UK’s emissions of CO2 come from aircraft, for example (more, according to some analysts). And demand for air travel - in non-pandemic times - is increasing.

According to PlaneStupid, the anti-expansion campaign group, an average European flight causes 400 kg of CO2 per passenger. 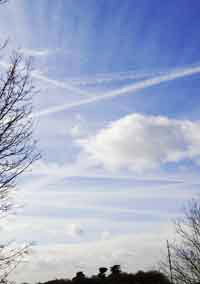 It’s worth noting that CO2 (carbon dioxide) is not the only active greenhouse gas emitted by aircraft during flying. There is a considerable number of other gases, - not all of which have a negative effect – but most do.

Vapour trails bear testimony to the emissions which are regarded as especially damaging because they are injected directly into the upper atmosphere.

The costs of fuel

The cost of fuel is tending to rise relative to other prices with time. This is largely because oil is becoming ever harder to extract. Many people fear that within the next twenty years or so fuel prices worldwide will skyrocket as accessible oil deposits decline. Already, oil companies are using the limits of technology to extract oil which a couple of decades ago would not have been worth the cost of extraction.

We have recently witnessed some of the environmental impacts of such desperate measures to obtain oil. The 2010 massive spill in the Gulf of Mexico was perhaps the most high profile example. A long, slow environmental disaster is also unfolding in Canada as oil companies fight to extract oil from the tar sands of Alberta. People are displaced, watercourses are poisoned and wild species are threatened by starvation.

Air travel continues to be popular, with passenger numbers increasing almost every year. Holidays, business trips and family visits are all major reasons for people’s perceived need to travel by air.

Many people who count themselves as environmentalists try to limit their flights - or even avoid flying altogether. Personally, I dislike flying and try to avoid it whenever possible. I much prefer slow travel but many longer journeys are just not practical that way.

Slow travel is an excellent alternative to flying but this is not an option which will appeal to many. Most of us have time constraints which keep us travelling quickly or not at all. So one approach to eco air travel may be to reserve air flights for only longer journeys such as inter-continental flights.

Another way to make your travel greener is just to avoid flying altogether. Again, this is not an option for most people who want or need to travel long distance. These days many people have family around the planet and keeping in touch is only really possible by using air travel.

So, given that most of us feel the need to fly on occasions, what are the best ways to limit the damage done to the environment by all those emissions from jet fuels?

One way towards green air travel is to work on the most efficient route for your journey.

Pick direct routes where possible and avoid flights that entail extra take-offs and landings. Most fuel is used during these stages of a flight.

If you have to make a stop-over or change flights, try to check the physical distances involved when you choose your airline and select your flight with this in mind.

Modern airlines are making greater moves towards fuel efficiency. After all, it’s in their own interests to do so.

Even so, some airlines are more efficient than others. The Department of Transportation of the US government looked into all the US airlines and has publishes a report on which are the most fuel-efficient. Alaskan Airways and Continental Airlines scored well and Delta Airlines and United Airlines fared badly.

One reason for these differences is that more modern aircraft are simply more efficient. The measure used by the DOT is miles per gallon per airline seat (occupied or empty).

Nevertheless, it is not efficient for airlines to scrap older planes prematurely. For one thing, there is a carbon cost in scrapping and replacing them with new planes. Every new plane manufactured has an embodied energy cost - that is the energy used in materials extraction and the production and manufacture of the finished plane.

Also, of course, the more efficient airlines may not happen to operate on the route you are planning.

Nevertheless it is worth taking a look at the options and trying to find the most eco-friendly airline available for your flight. Many airlines are now waking up to consumer interest in this issue and devote a section of their websites to informing and reassuring the public about their eco credentials.

How far it is possible to ensure the best choice is difficult to say. Many airlines employ PR consultants in order to make themselves look good and highlight the positive. This may involve downplaying or even obscuring the less environmentally friendly aspects of their practices. It's always well to recall that their principal goal is to make money for shareholders!

Public pressure to green-up will no doubt affect the way that airlines style themselves and will perhaps translate into real improvements in minimising environmental damage. How effective this will be in the context of climate change remains to be seen.

If you can, choose airlines which have worked to bring down their carbon footprint. This will help reduce the impact of flying.

Swiss Air, for example has made an effort to become more eco-friendly. One method they use is to limit their speed of flight. Choice of fuel can also be a factor.

The size of plane also makes a difference. Very large aircraft do not tend to be as efficient as smaller planes. Large airplanes on long flights are disadvantaged by the weight of the fuel they need to carry and the extra structural supports needed for their large frames. Medium sized planes such as the Airbus 320 and the Boeing 737-900 do best for flight efficiency.

As noted above, more fuel-efficient planes are being designed by manufacturers and are starting to find their way onto the runway.

Ryan Air has claimed in advertisements that it is the greenest European airline. This turns out to e true for 2018 - if you calculate emissions per passenger. In terms of actual emissions, it was found to be the 10th largest CO2 emitter after nine power stations! Ah, the power of advertising! See Wired for an article that explores this issue. As they say, there's really no such thing as a green airline.

Innovations adopted by such companies as Alaskan Airlines include extra “winglets” added to the wings to improve fuel efficiency and the installation of lightweight seats.

Alaskan Airlines has also pioneered using more direct descents to save fuel. Fast switch-off of the engine once landed also contributes a little more efficiency. Some other airlines are also now adopting these measures.

British Airways (BA) claims to be the first airline company to have an environment policy. They have improved their fuel efficiency by 28% since 1990 and are committed to further improvements. They now have a Fuel Efficiency Group which monitors and promotes efficiencies. They are also working on other environmental concerns such as recycling and waste.

BA has run a carbon offsetting programme for passengers since 2005. Offsetting carbon is not proven to be an effective way of reducing carbon emissions but it may at least be better than doing nothing. However, environmentalists often argue that such schemes simply legitimize companies' misdeeds - giving them a carte blanche to carry on with increasing emissions.

The fight to improve airline efficiency will continue. As a concerned traveller, try to checkout your airline choice well in advance by visiting their website to see what they are doing to minimize emissions and to become as eco-friendly as possible. It's also worth asking questions which may gradually put green air travel higher on the company agenda if enough people do it.

Green air travel may be a bit of a myth (like slimming food) but it's surely worth working to make air travel at least a bit more eco-friendly!

Here are some resources for people interested in the debate on air travel and climate change and airport expansion:

RSPB campaign against airport in the Thames estuary, UK

These are both British campaigns.

So far, there does not seem to be much appetite in most of the world for reducing air travel as a way to combat climate change. I've looked in vain for any prominent campaigns in the US. If you know of such campaigns please let me know - via Facebook or the contact page. Could be I've just missed something. Thank you.

Please do not copy without permission except for personal use.

Other pages related to green air travel which may interest you: