Have you wondered what is biofuel? And whether it is worth using?

What are biofuels? How are they made? Do biofuels present an opportunity for greener motoring? Or are the benefits of such green fuels outweighed by their disadvantages?

Biofuels are much in the news. They are sometimes touted as the solution to our motoring needs as oil stocks decline. Chances are, you may have already used some biofuel in your car.

This page looks at the main kinds of biofuels and whether using alternative fuels such as biofuel might contribute to greener living.

First, what is biofuel?

Biofuel is a term for fuel from plant sources. There are actually lots of different biofuels, many of which are very similar.

Biofuels are just fuels which are grown using plant sources (sometimes called "biomass") such as hemp, soya, oil seed rape, sugar and palm oil. These fuels can be in a solid, liquid or gaseous state. The kind that goes in your car tends to be "bioethanol" or "biodiesel" and is fairly similar to conventional petroleum-based fuel.

There are also new biofuels being developed which use algae grown on waste matter. Los Alamos research station is currently testing fuels grown on pollutants. This kind of biofuel is not yet available to most of us.

Recycled chip oil and other used vegetable oils can also be used to make biofuel but these tend to be small scale production units - sometimes individuals who choose to get their fuel oil this way. This can be a good and cheap source of fuel for those who have the patience and skills to set up a conversion unit.

You can, in theory, use almost any plant source to produce fuel; one recent Formula 3 car was developed to run on chocolate! (What a waste!)

There is on-going research into making biofuels from wood and organic wastes such as straw. This is thought to be a good idea because it does not divert agricultural production from food growing. The diversion of agricultural land from food production to fuel production is one of the main problems associated with biofuels.

What is biofuel?
Uses of biofuel

Biofuel is used for the same purposes as fossil fuels such as oil. It can not only power cars and lorries but can also be used to heat homes and fuel industry. Biofuels can be used to generate electricity.

Biofuels can be used to replace fossil fuels. In Finland as much as 19% of the country's energy needs are sourced from biofuel.

What is biofuel?
Which biofuels are being promoted?

There is a huge amount of investment going in to growing crops for biofuel production. Some of the commonest crops worldwide are oil seed rape, palm oil, sugar cane, corn and soya.

Just a few short years ago biofuels were thought to be the big answer to the carbon emissions from vehicles.

Why? Because fossil fuels cause carbon and other greenhouse gases to be emitted into the atmosphere whenever engines run. The stored carbon which is emitted was laid down in prehistoric times and has been locked away ever since until the moment when the fuel source is combusted. This is adding to the carbon dioxide (CO2) in the atmosphere and causing global warming.

Biofuels, on the other hand lock away new carbon, carbon which is pulled from the atmosphere as the crop grows. In this sense they are carbon neutral; carbon in equals carbon out within the space of the production cycle. But of course, it is not quite as simple as that!

If biofuels are chosen rather than standard fossil fuels (petrol, diesel, gas) then, the argument goes, no extra carbon is being churned out into the atmosphere.

Governments have taken this argument to heart and there is a massive swing in favour of plant-based biofuels. Here in Europe an EU directive is committing governments to make all fuel contain at least as much as 13% biofuel in the mix.

In the USA and Europe already huge areas of croplands are given over to biofuel production. This has the obvious consequence of taking productive land out of use for growing food crops. Inevitably, food prices are rising as less food is grown. This affects the poor more than everyone else and biofuel production is therefore becoming a political issue in many developing nations.

In the US the main biofuel crops being grown are soy beans and corn (maize) whereas in Europe the favoured crops are rape seed and flax seed.

The other thing which should be remembered is that biofuels use a lot of fossil fuels to grow. The crops grown for biofuels are not organic crops; a lot of fossil fuel-based fertiliser is used to achieve the desired yields. There are also transport costs and processing costs which add to the overall carbon use in creating biofuels from plants.

Nevertheless as much as 40% of carbon emissions can be saved by switching to ethanol grown from corn, for example.

In Europe, the RTFO (Renewable Transport Fuel Obligations) directive purports to encourage the growing of biofuel crops by methods which do not damage the environment. How much this is the case is not so easy to assess. The figures for UK biofuel production (year April 2013 - April 2014) show that over 100 million litres of used cooking oil provided 11% of all biofuel. On the other hand, imported corn from Ukraine accounted for 8% of all biofuel used in the form of bioethanol. Although it would seem to be less than ideal to import potential food as fuel, the total reduction in greenhouse gases for all biofuels in the UK in 2013/2014 was put at 70%.

What is biofuel?
But it's not all good... 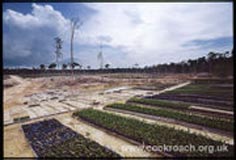 The EU is working towards around 5% of road transport fuel coming from biofuels. Assuming that biofuels produced responsibly are a good way of cutting carbon emissions, it is still rather obvious that 95% - or thereabouts - of our transport is powered by fossil fuels with all the damaging emissions that that entails.

In other parts of the world the biofuels story is complex. Other crops are displaced to grow fuel crops and valuable eco-systems are destroyed in some cases.

Perhaps the most shocking thing is that virgin rainforest is being torn up to grow palm oil for the biofuel industry. Ancient forests are natural "carbon sinks". When these valuable habitats are wantonly destroyed to make way for biofuel crops many other species suffer and irreplaceable bio-diversity is lost - probably forever.

Picture: a palm oil nursery in Indonesia (with thanks to cockroachproductions)

The tearing up of forests currently accounts for around 25% of all greenhouse gas emissions - and new biofuel plantations are adding to this. Indonesia and Malaysia are losing natural ancient forests at an unprecedented rate because plam oil is such a valuable crop. It has been used for decades in innumerable products throughout industry; now it is one of the major sources of biofuel.

Biofuels also create a new use for traditional food stuffs such as grains and soya. This has affected both prices and world reserves. According to the International Grain Council, grain stocks are now lower than they have been since the 1970s.

Energy outputs from biofuels may be deceptive because the energy put in can be relatively high. Fossil fuel based fertilisers, transport and processing all account for high energy inputs.

What is biofuel?
Water issues with biofuel production

Water is another issue. It has been asserted that 1 gallon of (corn) ethanol takes 1,000 gallons of water to produce. In a world where water security is becoming a growing issue, this certainly gives pause for thought! The data refers to irrigated crops - i.e. ones where extra water needs to be added to aid growth. According to Noel Gollehon, a senior economist with the USDA’s Natural Resources Conservation Service, about 15% of the corn for bioethanol is produced using irrigation. This is clearly not so sustainable as water tables continue to fall and drought is becoming more prevalent.

What is biofuel?
Efficiency and people

Brazilian sugar cane ethanol is more efficient than corn ethanol. The grasslands where cattle ranching has been practised for generations are now being ploughed up for sugar crops. This can lead to pressures to clear-fell more forest to increase cattle rearing lands. Native tribes people are currently being displaced in Brazil to make way for cattle ranching.

See Treehugger for more on this: http://www.treehugger.com/files/2010/02/brazil-biofuel-expansion-doesnt-directly-lead-deforestation-but-displaced-ranches-do.php

As more cattle ranchers convert to growing biofuels, more virgin rainforest is cleared to make space for the displaced agriculture - the net effect is yet more rainforest loss.

What is biofuel?
Space to grow

Many countries simply do not have the space to grow enough biofuel. To meet current targets the UK would have to use a quarter of all agricultural land for biofuels. This is not tenable and so pressure grows to import biofuels from abroad - leading to yet more pressures on food and forests in developing nations, in many cases.

There are some potentially positive developments on-going. Jatophra matacensis, for example is a tropical plant which grows in waste spaces and marginal land which is unsuitable for other crops. There are plans to use it as a source of biofuel. It has been tried in Mali, where it could become an additional source of income for poor peasant farmers. Air New Zealand has already flown a plane with 50/50 jataphra bio-diesel.

As noted above, biofuel from algae is also being researched.

What is biofuel?
Can my car use biofuel?

This is something which you must check with the manufacturer for peace of mind.

However, most diesel cars will be able to use biofuels, when they make up only a small percentage of the total fuel.

Diesel motors can generally handle oil-based biodiesels, such as the ones made from recycled oil.

Biofuels are slightly less efficient than fossil fuels, that is to say they burn a little cooler. This may cause problems for some cars.

What is biofuel?
Are biofuels living up to the promise?

Recent research from the Nelson Institute's Center for Sustainability and the Global Environment (SAGE) indicates that yield forecasts for biofuel crops have been widely over-estimated. Yield tables were used to base forecasts on and they have proved to be rather over optimistic according to Matt Johnston of SAGE.

I don't believe that biofuels offer real benefits for sustainable transport - for the reasons outlined above. At least, not yet.

What is Biofuel? - TOP

Some books on biofuels

What our readers say...

I've just fallen into your website and wanted to say how great it is!! I've got a lot of cheap ideas and when you're on a tight budget - that's vital! - Gail, NZ

Your site has been an exceptional resource as I have sought to modify my lifestyle. - Art, US

Just a big thank you for all the info! - Estelle, US

Loved your simple, clear approach. Thanks for the many great tips. - Laura, AUS

I found your Web site fascinating... - Steve, US