Oat flour or oat groats - oats can be enjoyed in so many different ways! 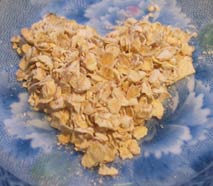 So what's so great about oats? And what do the different types of oats do for us?

This page looks at different types of oat products, from flour, right through the various porridge oats, to oat groats (for the really hardy!)

There's a little about their history - culture even - and a run down of the nutritional benefits of eating oats.

In early times the Scots were renowned for their ferocity and hardiness in battle. In more recent times, many Scotsmen and Scotswomen explored and helped colonise huge parts of the world, bringing elements of their unique culture to places as far apart as New Zealand and Canada.

How did they accomplish all this? They grew up eating oats and raised their kids to eat oats!

Samuel Johnson, the famous diarist and dictionary writer, said of oats that they were

"... a grain which in England is generally given to horses, but which in Scotland supports the people."

Maybe the English were missing out (though, as a contemporary noted, they had exceptional horses!)

Words of wisdom from Spike

A little more on the philosophy of eating oats before we come to the serious issue of the many forms in which oats can be enjoyed!

The late comic genius Spike Milligan had this to say about porridge:

On a plinth in London
A statue we should see
Of Porridge made in Scotland
Signed, "Oatmeal, O.B.E."

(By a young dog of three)

Oat flour and oat groats - oats anyway you like:

He was asked by reporters how he accounted for his longevity. The first thing he said was that he always ate porridge every morning!

Anecdotal evidence, of course and he didn't say what type of oats he favoured.

Oat flour and oat groats - oats anyway you like:
Oats are solid nutrition

As part of an organic eco-friendly diet oats are invaluable. Here are some of the nutritional benefits.

Oats are high in potassium, have useful amounts of calcium and are also a fair source of protein. They are also moderately rich in B vitamins, B1, B2 and especially inositol, and their carbohydrates provide a long slow delivery of energy to our systems.

In addition, oat bran is an excellent source of magnesium. Magnesium is found in decent amounts in oats and oat flour, too.

Magnesium is needed to help maintain healthy blood pressure and helps prevent diabetes. It is also helps protect against osteoporosis and several other conditions. It is a nutritional element that helps build a strong nervous system and muscular strength. It is sadly deficient in many modern diets.

Oats are recognised as being particularly good for our hearts. They can play a role in preventing heart disease and maintaining a healthy circulatory system.

It does not matter whether you eat your oats in the form of oat flour, oat groats or any of the main types of oat products. But there are some kinds of milled oats which are probably less beneficial than most.

Oats are produced and milled in many different ways. See below for the different types available.

From oat flour to oat groats:
Oats in come in many different guises 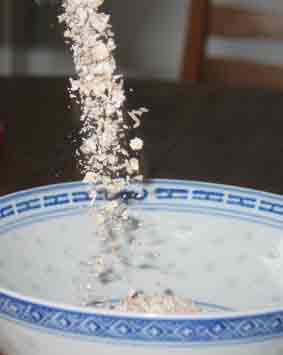 The commonest way they are processed is as rolled oats.

Rolled oats are easy to digest because the groat (seed) is steamed and flattened to expose the central starchy matter. At this stage the oat grain is still essentially a whole food. Oat flakes are prepared in a similar way.

Further processing is done to create quick cooking and instant oats. Quick cooking oats are sliced finer so that the cooking water more quickly breaks down the fibres of the oat.

Instant oats are also sliced and then pre-cooked. A lot of the nutritional benefit is lost in the process and many of the market brands have added sugar and salt too. A big loss to save five minutes!

Proper rolled oats cook really quickly and you can speed the cooking time up simply by pre-soaking them.

Oat flour is made from ground oat groats and as such contains very little gluten, so it may need to be combined with other flours if bread is wanted. It can be useful for some people suffering from coeliac disease, though it is not completely free of gluten.

Oat bran is generally removed in processing but is a valuable source of fibre and is extremely useful as a natural aid to reducing cholesterol. You can buy oat bran in most health food stores. Some packaged cereals contain added oat bran as a health aid.

For the best porridge!

Pinhead oats are oat groats which have been chopped into tiny pieces (like bulgar wheat). They are particularly good for porridge recipes. They give a dense, grainy texture which might be a bit of an acquired taste. Once you get used to porridge made this way, you will probably find rolled oat porridge lacking in character by contrast. This is very much a personal preference, of course.

For best results when preparing porridge a stainless steel double-boiler is a useful piece of equipment which allows you to cook your oats thoroughly without them burning or sticking to the pan.

Recent research shows that berries such as strawberries combine well with nutrients in oats. Oat "phenols" and vitamin C combine to make LDL cholesterol (the "bad" kind of cholesterol) more stable and safe.

Oatmeal is similar to pinhead but cut a little finer. Oatmeal is used for making the famous oatcakes.

These are the best food I know for walking holidays. They weigh practically nothing and they sustain you for hours. They have to be the closest thing to the elves' "lembas" on the planet!

Oat groats are the hulled whole oatgrain. They have been cleaned and (usually) toasted. They are a superb source of wholegrain food. You can eat them cooked, just as you would cook rice or wheat berries, or you can soak them.

Organic oats are clearly the best, whether you eat them whole, rolled, pinhead, or whatever.

Oats are fantastic value. Even organic oats are really inexpensive, especially when you consider their nutritional value.

Oats have to be one of nature's original super foods!

No matter which type of oats you favour, adding a few oat-rich dishes to your diet is a good way to go. Organic oats are best for green living and for health, of course.

A Homemade Muesli Recipe for the Best Breakfast

The Benefits of Walking