- thanks to new improved turbine design

Offshore wind power - is it the best form of renewable energy?

Here are a few thoughts on the benefits of offshore wind power and onshore installations.

Wind power has enormous benefits for us because it is sustainable and renewable. However, many people have reacted negatively to the march of wind turbines across the landscape. Not everyone regards giant wind turbines as beautiful and even those who do have limits as to how many they want to see placed in familiar and cherished landscapes.

The benefits of offshore wind power

One solution is to build wind farms off shore where turbines are out of sight to most energy users. The shallow seas off Holland, Eastern England and Denmark are ideally suited to offshore wind farms. Because of the difficulties of building in water, these wind farms are more expensive to build and install. The costs of bringing the energy ashore are also greater.

However, these wind farms can be built in relatively concentrated areas, in arrays of several hundred units. They are not considered to be a danger to shipping or even to birds, provided that the sites are well chosen. Work is ongoing to monitor and minimise their impact upon migrating birds and sea-going species.

Offshore wind farms can provide massive amounts of energy and the work needed to maintain and manage the turbines is relatively small compared to the costs and work involved in maintaining a conventional power plant. And of course, there are no associated carbon emissions beyond those produced when the turbines are built or maintained.

Another advantage of offshore wind power is that the wind tends to blow harder at sea. Turbines are becoming more efficient at capturing this energy.

Now Seimens, one of the world’s largest wind turbine providers, has started to revolutionise offshore wind generation. They have developed a new generation of wind turbines that will reduce maintenance and improve reliability. They are also able to think for themselves! We do not expect them to take over the world just yet – but their iconic profiles will appear in remote locations and windy offshore locations in the near future, to all our benefit.

For the latest on these wonderful, sleek machines please see the videos from Seimens and other manufacturers on YouTube.

Despite many tales of "Nimbyism", some people actually welcome wind turbines, even onshore and close to home. The village of Fintry in Scottland lobbied the wind company to provide an extra turbine and sell it to the village so that they could make some money for the community. The residents of Fintry are now benefitting from thousands of pounds from their turbine – and it’s all being ploughed into making the community even greener.

Some tourists have even admitted to being attracted to wind turbines in the landscape. Visitor centres help. A visit to a turbine is a fascinating experience. Here in East Anglia you can visit the turbine in Swaffham, climb inside the tower and watch the turbine blades from the central viewing platform. Wind farms such as Ardrossan (see below) have been well accepted by the local community.

However, there is definitely an upswing in the number of communities resisting the building of new onshore wind farms and even the placing of small numbers of turbines. Clearly there are some good arguments for siting a good proportion of wind turbines offshore. 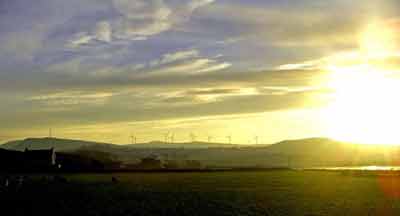 Scotland is now on course to be 100% powered by renewable energy in the not too distant future (2020). Renewables already provide more than 30% of Scotland’s power and about half of that energy is provided by wind power. Scotland has set ambitious renewable energy targets despite still having considerable reserves of oil.

There is plenty more potential; an estimated 25 Gigawatts of renewable energy could be harvested from coastal waters off Scotland alone. The amount of renewable wind energy available for harvesting on shore is thought to be less than half that from potential offshore wind power installations

Other European countries are marching on with offshore wind projects.

Not all offshore wind projects get beyond the planning stage without a hitch. A proposed wind farm off Cape Cod has faced stiff opposition from Native Americans. They regard the chosen site as sacred.

The USA is still only beginning to adopt offshore wind power as a sustainable energy source. This is at least in part because the planning process is lengthy, with new projects currently taking around 7 to 9 years to get approval.

The US government has recently adopted a "smart-from-the-start" approach so that new projects automatically integrate the need to protect wildlife and conserve marine ecology while building sustainable power sources for humans.

So which is best?

Offshore wind power is clearly better in the minds of those who find wind turbines ugly or invasive. And many people would have a problem with wind turbines being placed just everywhere and anywhere in the landscape.

The advantages of offshore wind turbines is that they are largely out of the way and most people are not going to be launching campaign groups against them anytime soon. However, offshore wind power is more expensive and there are some further disadvantages. Wind turbines at sea are always going to be less accessible for maintenance. Problems with sealife may yet emerge and it is still unclear how far migrating birds will be affected by large arrays of turbines.

Wind power is a genuinely renewable energy source. The need for renewables is likely to become more and more pressing as the facts about climate change become better understood by governments around the world.

Some onshore wind turbines will be needed but probably a good proportion of our energy needs may be met in future by offshore arrays. Advanced new turbine designs will make this a more acceptable option. The new turbines from Seimens are more efficient and lighter in weight. This should make offshore wind power easier to install and maintain and the intelligent design features will enhance controls and feedback information.

Gradually we are becoming smarter at utilising natural resources such as wind, wave and solar power. Benefits from the new offshore wind power arrays will flow to both consumers and ultimately, to the preservation of our environment and climate.

The main advantages of renewable energy

The benefits of wind energy