Pesticide Problems are a Growing Concern 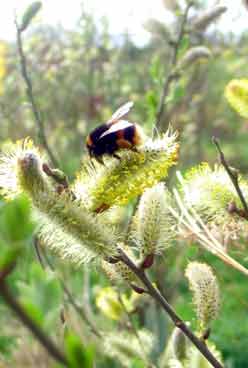 Pesticide problems: so what are the problems with pesticides?

Are there any safe ones? Are there many alternatives? This page outlines some of the main problems with pesticides and gives a very brief history of their development and use.

And, yes, there are alternatives to a good many pesticides!

Here's a disturbing quote from a recent US Geological Society report into pesticide contamination:

"More than 90 percent of water and fish samples from all streams contained one or, more often, several pesticides."

Picture, above right: bees and other beneficial insects can be adversely affected by pesticides

I include this brief outline on pesticide pollution because if you are interested in green living and the environment you will want to know these things! It is, however, only an introductory guide to this big subject. This article can only provide an overview of the main pesticide problems.

Pesticide problems:
What are pesticides?

The U.S Environmental Protection Agency (EPA) defines a pesticide as "any substance or mixture of substances intended for preventing, destroying, repelling, or mitigating any pest".

Pesticides can be a chemicals or they may be biologically based. Many pesticides are poisonous to humans and other mammals.

Pesticides can be ranged against a host of life-forms such as a insects, weeds, molluscs, birds, mammals, fish, roundworms and microbes.

Pesticides are used because the life-form they are designed to destroy competes with humans or livestock for food, spreads disease, destroys property or just because they are a nuisance.

Some pesticides work by interfering with the life-cycle of the pest. They may not kill individual pests but they stop them reproducing effectively.

Pesticides are not new. The ancient Sumerians used sulphur to control crop pests more than 4000 years ago. By Renaissance times a panoply of toxic chemicals were in use, including mercury, arsenic and lead - all now known to be highly toxic.

In the 17th century the tobacco plant yielded up a useful pesticide, nicotine sulfate. It is still in use today. Pyrethrum from chrysanthemum followed in the 19th century, as did rotenone from a tropical plant.

The rise of DDT

In the 1940s DDT became the first widely available synthetic insecticide. It was highly effective but it showed signs of becoming less effective as insects became resistant to it.

It also accumulates in the bodies of animals high up the food chain, causing problems with reproduction. Hawks and owls rapidly declined in numbers. DDT was even found in the fat of polar bears, thousands of miles from where it had been used.

Rachel Carson wrote her ground-breaking book Silent Spring, published in the 1962, which drew attention to the disaster which was gathering pace across the globe. Public awareness of problems with pesticides grew and by the 1970s DDT was banned in many countries.

DDT is still used in some places for malaria control and it is stillpresent in the bodies of many animals, even hundreds of miles away from where it has been used and years after use had stopped.

However, the case against DDT is not entirely straightforward. Malaria is still a major world health threat. According to the WHO (World Health Organisation) 1 million people a year are still dying from it (2009 figure). Nearly half the world population is at risk from malaria and there are around 250 million cases each year. Some authorities argue that we have put wildlife ahead of people.

DDT is classed as a POP - a Persistent Organic Pollutant because it is very slow to break down in the environment into safer elements. It therefore tends to be a bioaccumulator, that is, it accumulates in the bodies of animals high up the food chain. That very often includes us, of course.

Now there are new generations of pesticide which may not often produce quite such dramatically devastating effects upon wildlife.

However, since I first wrote this page there has been increasing alarm among environmentalists and members of the public about the catastrophic decline in bee populations across the world; the most likely main cause is the widespread use of "neonics", a potent group of chemicals related to nicotine. See my page here for more on this.

Nevertheless there are many ongoing issues. Modern synthetic pesticides are affecting wildlife, the health of humans and even the health of babies.

A survey of baby foods in 2000 showed detectable pesticide residues in nearly 50% of foods sampled. 14% of foods tested showed residues of more than one pesticide at levels 30x the proposed limit of 0.01mg per kilogram.

It's hardly a grand start in life to have to eat such stuff!

A UK government report in 2003 showed over 70% of apples tested had pesticide residues. Lemons were even worse at over 90%.

The commonest foods, bread, rice and potatoes were not much better: 61% of bread , 54% of rice and 35% of potatoes all contained residues.

Here's an excerpt from a report on contaminants found in wine in the EU (March 2008). A number of bottles of wine were tested for pesticide residues.

And you thought you just had a hangover!

Clearly human health is at risk when chemical residues are present in so much of our food supplies.

Even organic foods cannot be absolutely guaranteed as pesticide free because some pesticides persist for so long in the environment.

Lindane, for example, breaks down into benzene hexachloride (BHC) which is even more toxic and persistent than lindane itself. Lindane is now banned in many countries.

Here are just some of the main pesticides in use today which are causing ecological concern.

Atrazine is one of the most commonly used pesticides in the United States. It is a herbicide commonly used on maize crops and many other crops in common use such as sugar cane and even grassland.

It is now linked to serious disruption in the life-cycle of frogs and other amphibians. It is also appearing in water supplies. It is now banned in several European countries.

They are mainly used as insecticides and they work by attacking the central nervous system. They affect vertebrate animals - including ourselves - as well as insects. OPs are used in sheep dip and many farm workers have experienced toxic effects.

The Pesticide Action Network, UK, estimates that about 1/3rd of all insecticide use in Britain involves OPs.

Longer term, there are a number of health concerns from the use of "OPs". Respiratory problems, memory disorders, cancer, depression and neurological problems, miscarriages, and birth defects may all be linked. Quite a list.

Rotenone is a pesticide obtained from the roots of tropical plants. It has long been used by organic farmers to control insect infestations. There is now a suspected link with Parkinson's disease and the Soil Association (the UK body responsible for setting organic standards) has suspended its license for use in Britain.

There are plenty of other pesticides which are causing concern for both health reasons and for environmental reasons. The above mentioned are only a few examples.

For more detailed information on pesticide problems it is worth consulting the Pesticide Action Network (PAN) which does good work in exposing pesticide pollution in foods and drinks.

Pesticide problems: what are the alternatives?

Organic farming and horticulture offers a number of good alternatives to toxic pesticide use.

For example, there are now many biological controls where benign species are used to control less benign ones. Ladybirds (ladybugs) are often introduced to control aphids (greenfly and others).

Organic farmers also use sprays to stimulate the soil. These sprays are non-toxic. They work by stimulating fungi in the soil which help feed the plants and help them develop resistance to disease and insect attack.

There is growing interest in systems which stimulate the soil with natural minerals and supplements to help plants' immune systems to resist attack. See http://advancingecoag.com/ for just one example.

There are also many successful barrier methods which help deter insect attacks; the use of nets to ward off birds and larger insects, for example.

There are a small number of organic pesticides which are legitimate to use in organic food growing. Some of these can be made at home using simple ingredients such as soap and alcohol. Some commercially produced sprays are based upon nicotine and are relatively harmless to the environment. Most organic gardeners and practitioners of permaculture only use these as a last resort!

All these methods and more are being studied and improved at organic farming institutions worldwide. For more information please see the links page.

Why organic is best