Some Causes of Water Pollution

There are many causes of water pollution, some of them natural, some man-made and some natural but exacerbated by human activity.

So what are the main causes of water pollution?

Here are some basic facts about water pollution from industry, agriculture and domestic sources.

Although industry and agricultural factors are huge, our domestic waste products have a considerable and increasing effect upon water pollution. Water companies are having to be more and more pro-active to deal with the deluge of bathroom and kitchen chemicals we use on a daily basis!

Read on to learn more.

These brief outlines of major environmental problems are offered as a quick over-view only. The issue of the causes of water pollution is far too big to do justice to on a website such as this.

If you believe that you are affected by water pollution, check the links section for organisations which could help you. 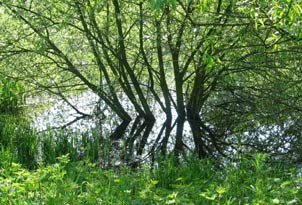 Picture above: Willows with their roots in water at the margins of a reservoir. Many rural bodies of water can be affected by water pollution, especially from agricultural run-off.

Sediments and organic debris - a natural cause - or not!

Natural organic wastes and soil can be one of the biggest causes of water pollution in some areas. Sediments build up over time in rivers and lakes as rain water washes soil, silt and organic debris from the land. This process may lead to local problems for fish and other water-based living creatures.

This natural process is made far worse when humans add an extra burden of wash-off from activities such as logging, construction and agriculture.

An additional set of problems occur when chemicals and petrochemicals are added to the contents of wash-off, as in the treatment of oil tar sands to remove the oil, as is currently happening in Canada.

The environmental destruction going on in Fort MacKay, Alberta and in Saskatchewan is causing lost livelihoods and dramatically increased cancer levels for local people. Fish from local rivers have growths and deformities and are regarded as inedible. See Oilsandtruth for more about this.

Industrial discharges cause many, many water pollution incidents.

Some stretches of river in the UK used to have no fish at all because the water was so polluted from factories routinely discharging effluent into them. Thanks to tighter controls most are now much cleaner; even the Thames now has fish once again. The battle UK waterways is far from over, however. Recent causes of water pollution include cancer treatment chemicals, anti-androgens (hormones which cause feminisation) and agricultural pesticides.

And this pattern of industrial pollution is being repeated in many countries.

Some rivers in the east of Europe are now very heavily polluted. The Yellow River in China is now one of the most polluted waterways in the world; stretches of the river are now so toxic that animals drinking the water may die and many nearby communities are blighted by high levels of cancers.

Industrial causes of water pollution are becoming more closely monitored and controlled in many countries. Nevertheless, with the rush for oil in the tar sands of Alberta, Canada has allowed massive pollution of ground water and rivers. Profit and perceived economic benefits are often allowed to outweigh ecological sense.

"Fracking" for gas shale deposits are similarly causing a lot of disruption and pollution across parts of the US and here in Europe.

The main causes of water pollution:

Groundwater pollution can happen even from household use of weed killers. A study in 1996 of wells in Iowa, USA, found that over half of them were polluted by chemicals from weed killers.

In the US many rural communities draw water from wells so the quality of groundwater is crucial to their health.

Chemicals in detergents and personal care items can be hard to remove from water. Some leave traces which are strong enough to affect aquatic organisms.

Some water pollution is caused by our love of drugs. In the US there are around 200 million prescriptions for Prozac each year. New research shows that some of this drug remains in water after it leaves treatment works. Fish downstream of waste water treatment facilities are behaving in abnormal ways, becoming more sluggish and even exhibiting bizarre behaviour.

The main causes of water pollution:
Fertilisers and pollution

Farmers' use of chemical fertilisers can also affect surface waters such as lakes and rivers and eventually end up in groundwater too.

Agricultural run-off often causes algae in the water to "bloom" or reproduce at an artificially fast rate, until the water is choked with organisms, which then tend to suffocate and die as there is not enough oxygen in the water to support them.

When this happens, local fish stocks are affected too. Fish and other water organisms often find it hard to survive in the polluted waters.

By the lake near where I live there are notices put up every year warning people of the dangers of toxic blue-green algae (see picture left). These are an example of algal blooms. They happen because of the routine use of chemical fertilisers on the nearby wheat crops.

The problem is especially bad where years of poor farming practice has led to dusty soils without enough structure to hold nutrients in place until they can be used by plants.

If organic matter has been regularly returned to the soil a complex, rich soil structure is maintained and run-off is less likely to happen.

Some of these problems can arise with organic fertilisers too, though they should be easier to avoid. Problems can occur as a consequence of poor farming practices, where organic manure is stored too close to water sources.

Organic fertilisers (properly composted,) are less prone to causing agricultural run-off once they have been applied to the land because they help build soil structure. They are also generally less quickly dissolved by rainfall than many commercial fertilisers.

Picture, above: Toxic blue-green algae can be a threat to dogs and other swimmers

If there are too many nitrates (from fertilisers) in the drinking water supply this can lead to Blue Baby Syndrome, a potentially fatal disease affecting newborn babies.

There are other ways in which modern farming practices may contribute to water pollution.

Many animals are kept in intensive rearing sheds and are routinely fed drugs such as antibiotics. As around 75% of such drugs may be excreted, the resultant manure becomes a potential source of water pollution.

Antibiotics in water sources help create resistant strains of microbes, which gradually undermines the usefulness of antibiotics in treating diseases.

Metals in animal feeds can also be a source of toxic contamination which ends up in water courses. Zinc and copper are necessary for health but may be oversupplied in feedstuffs and end up being excreted.

As noted above, storage of manure and liquid animal wastes can cause problems if "lagoons" or other storage devices are allowed to leak their contents into nearby water courses.

Pesticides are one of the more important causes of water pollution.

Pesticides, including herbicides and fungicides are also part of the modern farmer's arsenal which can end up in water supplies. Farmers very often spray empty ground with herbicides which kill weeds and make it easier for them to then sow seeds later, after the herbicide has washed away.

Fungicides are used frequently on crops such as wheat to prevent fungi such as ergot. (Ergot is a real menace: it can cause a kind of mania.) Pesticides are often routinely used to prevent damage by airborne insects.

A study by the National Geological Society (US) showed that 90% of the water sources tested were contaminated by pesticides from agriculture and other industries. Pesticide pollution is a growing concern world-wide.

There are other ways in which farming affects ground and surface waters. Animals which are kept indoors or in small pens create manure which has to be disposed of carefully.

If this is not done properly there may be contamination by run-off seeping into water supplies. The waste materials may carry harmful bacteria and will almost certainly have a polluting effect, bringing too many concentrated nutrients into local streams or ponds.

This causes them to lose oxygen, ultimately stifling the organisms which would normally live there.

Many people in the world still do not have access to clean, safe water.

Here are a few organisations which seek to improve water supplies in the developing world:

http://www.wateraid.org/uk/ is supported by Glastonbury Festival and has a good track record of helping provide safe water and sanitation in countries in the developing world.

Other environmental pollutants such as petrochemicals and soot from industry or domestic fires may find their way into water systems. Soot may simply blow into water, carried on the wind.

Petrochemicals residues and debris from tyres are washed down storm drains besides roads. The water coming off the surface of roads can contain a hazardous cocktail of chemicals. This can be a very significant source of water pollution, so much so that fish have been known to die after unusually heavy rain washes such residues away suddenly into nearby rivers.

Also, some motorists still dump used engine oil into a nearby drain when carrying out an oil change and this finds its way into the water supplies.

Petrochemical waste is one of the main causes of water pollution in urban areas.

Sewage is another human product which often ends up as a major pollutant of water sources. While this is not routinely a problem in the developed world, in developing countries there is often a serious lack of proper facilities for disposing of human waste.

The United Nations estimated in 2000 that just under half the population of the earth (44%) was living with unsatisfactory sewage disposal systems. So sewage can be one of the main causes of water pollution for some people.

Sewage also becomes more of a problem when there is a crisis, for example when flood waters swamp drains, or in the aftermath of an earthquake.

In the developed world sewage can also pose other problems. For example, the birth control pill is getting into water supplies through its presence in urine flushed down the toilet. It has been shown to affect fish, causing feminisation and reproductive problems.

Chemicals from domestic sewers can also leak into the wider environment. This occurs in developed counties where the sewage system is strained to breaking point by increased loads and and where the infrastructure is aging and insufficient for the task.

The Causes of Water Pollution - Top of Page

How to conserve water