Cycling For Fitness and Health

Cycling for fitness and health makes a lot of sense.

How else can you find a good, aerobic exercise in the fresh air that you can do sitting down? 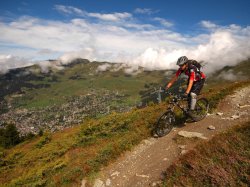 I've been a moderately keen cyclist almost all my life. As a kids, we used bikes as convenient and relatively safe transport for exploring the countryside around us.

As a young adult I used my bike to commute through the crowded rush hour streets of London. It was exhilarating but also scary, as there were, then as now, oblivious car drivers who would cut you up at junctions or roundabouts. Hide Park corner was particularly challenging - a huge, fast roundabout with several lanes and cars and taxis jostling for position.

Picture, above: Mountain biking is fun - and a good way of cycling for fitness. Picture thanks to Andy_c

When my children were small I virtually never cycled. Like many people, I got nervous because as a parent you want to do everything for the health and welfare of your children. Cycling did not seem to fit the picture too well. Many parents seem to share this viewpoint.

Increasingly, roads are busy places and it is easy to feel crowded out as a cyclist. Cars and trucks become faster and more powerful year on year. New roads are built which make few allowances for the cyclists, especially inexperienced ones. And when there are cycle lanes on busy roads, they are often scarily narrow, or they give out just at the most crucial intersections!

Modern road conditions often make for a self-perpetuating destructive cycle; people perceive them as dangerous - and so cycle less and the roads become ever more congested as everyone takes to their cars, even for the shortest journeys. The school run exemplifies this very well. In many towns and villages across Britain a large part of rush hour traffic is created by parents running their children to school by car.

So it's very easy to give up on cycling.

"Since I've become more observant of how bikes and cars interact, I've decided that bicyclists have two major safety threats: cars and themselves." -- Lee Nichols

But, in actual fact, cycling is remarkably safe, even if you compare it with other forms of transport on the basis of miles travelled. In a recent UK government survey, cycling came out as slightly safer than walking (as a pedestrian). Unfortunately it is still not nearly as safe as sitting in a car! (One recent survey and analysis put it at around 3 times more hazardous than car travel on a like-for-like journey basis.)

Cyclist casualties have risen in the UK in recent months, possibly as a consequence of a new influx of inexperienced riders on the roads as a response to the credit crunch. It's certainly noticeable here that more people are cycling. Here in the UK cyclists are 5 times more at risk than in Denmark. We also have a very low percentage of traffic-calmed streets as compared with other European counties.

Clearly, cyclists are vulnerable road users. Another recent study in the Guardian newspaper found that poor road discipline by cyclists was responsible for only a tiny percentage of casualties. Many bike users on the roads are not cycling for fitness so much as for transport, of course.

Cycling can be relatively safe. Most riders could benefit from basic safety training. An excellent website for avoiding bike accidents involving cars is http://bicyclesafe.com/. It's developed for a US audience, so the roads will be back to front if you are viewing it from the UK or Australia.

Off-road cycling is also an option for some, especially if you are mainly cycling for fitness and health.

Cycling for fitness:
So what about the health benefits of cycling?

Here are some of the many benefits of cycling for fitness. First, cycling provides excellent aerobic exercise.

Aerobic exercise is the type of exercise which makes your heart pump faster and your lungs fill with air.

Decent levels of aerobic exercise are arguably one of the main things missing in the modern lifestyle, as lived by millions of us.

Cycling on or off road provides a naturally varied level of aerobic exercise, with periods of intensive activity interspersed with more leisurely movement. This is akin to the HIIT (High Intensity Interval Training) which is now so popular with some fitness gurus. Certainly cycling in a varied landscape with some moderate hills can seriously improve your fitness levels.

There's lots of research to show that cycling can help prevent all kinds of diseases, particularly some of the big "diseases of civilisation": heart disease, high blood pressure, obesity and adult onset diabetes (type 2).

According to one study, cycling can reduce disease incidence by as much as 22%.

Just a small amount of regular cycling can change people from being unfit to being relatively fit. One study showed that people who regularly cycled to work a distance of just 4 miles would become fitter than average in a few weeks.

Although noxious fumes can be one hazard of cycling, the amount which people are exposed to inside their cars is far worse. And of course, cyclists will generally select relatively traffic-free routes whenever possible.

Tailpipe fumes can be more than a nuisance, however. A University of London study concluded that urban cyclists were at risk from inhaling black soot which can cause health problems such as heart disease. Exercising vigorously and breathing deeply leads to cyclists taking in more than twice the amount inhaled by pedestrians.

Several studies have shown that cyclists and pedestrians are less at risk than bus and car passengers. I expect more studies are needed for a clearer view - but for me this is yet another reason to separate cycle traffic from motorised traffic in congested and polluted areas.

Cyclists do usually (but by no means always) have the choice of using back routes but the fact is that many back routes are slower. I always think it's rather unfair that cyclists should be expected to travel further to get to their destination than motor traffic.

Cycling naturally gives you a good mix of types of exercise. When you come to a hill you are challenged to work hard against gravity and your pulse rate elevates.

Cycling along the flat you are given gentle, continuous exercise which builds stamina and muscle power in all the main muscle groups.

Whizzing down hills you get a well-earned rest and a terrific sense of exhilaration.

When you have finished exercising, you feel warm and relaxed, yet alert (unless you've just done 60 miles, of course!)

One of the big advantages of cycling for exercise is that, like swimming, cycling is a low-impact sport. You are seated, so there is very little stress on your frame. Your feet do not jar on the ground as in running. There are no undue stretches or jolts as there are in many sports. For instance, if you play football you will almost inevitably pull muscles and strain tendons as you over-reach for the ball. If you rock climb, you will suffer strained tendons as you reach to straddle that gap. But with cycling all of this is unlikely.

There is some risk of a sore seat if you do too much too quickly and a good, well-padded saddle is a great investment. Knee injuries are a possibility if your bike is too heavily laden or you resist changing down in good time. Standing starts can put a strain on legs and knees and back strain is also a possibility.

It is important to ride a bike which is well-fitted to your frame and also to build up your strength and fitness gradually.

And of course there is a slight risk of falling off. Most adult cyclists rarely fall off their bikes. The only time I've fallen off I was at a virtual stand-still, having stopped too quickly to view a rare bird!

Cycling for fitness is a lot more eco-friendly than driving to the gym for a work-out. It's generally fast and convenient, too provided that you have somewhere local to go. Where I live, lots of people arrive in their cars to use the cycle track. They have to really, as the local roads are pretty scary for anyone who has not got steel in their nervous system.

What I love about cycling for fitness - and fun - is that you can travel a fair way in a few hours and visit some pretty fine places you might not have otherwise discovered. And when you get tired you can draw up at a wayside pub and take a bit of light refreshment in the form of real ale. What a brilliant combination - as long as you are not silly enough to get pickled, of course!

You can buy bicycles and related equipment such as helmets and lights from Amazon.

Bicycles and bike equipment from Amazon

A few examples are also shown on the right hand sidebar. If you are purchasing a more expensive model it is worth getting an individual fitting.

Cycling for Fitness - top of page

Cycling for Fitness and Health