Cycling in Belgium - Our Experience 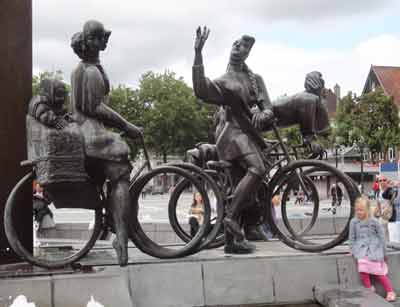 Cycling in Belgium is generally a breeze. There are lots of good cycle routes and the signposting is sometimes adequate, or better. Anyone familiar with cycling in Holland or France should find it is another easy place to go cycle touring. If you are completely new to cycle touring, Holland  or Belgium will give you a gentle introduction, as the routes are just so good.

This is brief view of our experiences when we cycled in Belgium for the first time in the summer of 2011. We do not have an extensive history of cycling in Belgium to draw on – but our time there was good and it’s clear that Belgium has a fine, integrated cycle network. Here, for what it’s worth, is an account of our experiences. First, cycling into Belgium from Zeeland in Holland.

From Holland to Belgium 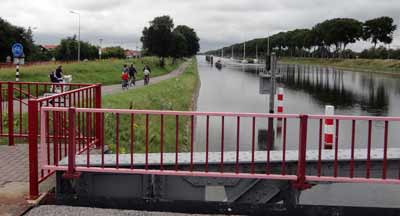 Picture: A Belgian canal with bike path alongside

On crossing into Belgium from Holland, where the cycle routes are just amazing, two significant changes were quickly apparent.

First, there were fewer routes to choose from. This isn’t too significant, however, as there are still plenty of good cycle paths and cycle lanes to take you almost wherever you need to go. It’s hard for any country to compete with Holland, which has the most comprehensive cycling network of any country in the world to date. The Belgian routes are generally well signposted and many are traffic-free purpose-built paths running alongside roads and canals.

The second change was that some of the cycle routes we were on were just not as well maintained as those in Holland. There was more encroaching vegetation and many of the cycle ways along side canals had a lot of damage from tree roots. This made progress a little slower than we had been used to in Holland. Nevertheless, most of the routes we tried were perfectly possible for tourers like us, with our loaded bikes.

We did notice that the number of cyclists on racing bikes (the lycra lads and lasses) always declined steeply when the road surfaces were poor. Belgium is renowned for its love of cycling and in particular cycling races. We saw lots of small groups of identically clad cyclists rolling along in perfect peloton formation.

Racing cycling in Belgium is a popular sport and race meetings are fiercely competitive. Most of the cyclists who frequently overtook us as we bumbled along were doing at least twice our speed. (Unfortunately we never happened upon an actual race despite the fact that there are supposed to be loads of them happening on weekends in Belgium throughout the year.)

Picture: On the canal to Bruges - a hand-cranked passenger ferry

Belgium has a lot of canals, being for the most part relatively flat. There are good cycle ways down many of the main canals and this can be a viable way to travel about between big cities. We took the canal from Sluis in Holland to Bruges, which was tree-lined and very peaceful.

Apart from the aforementioned tree roots, the main problem with this is that the journey can be a bit uneventful and we found ourselves longing for a bit more variety. So much so that when we found a hand-operated ferry crossing to the other side we didn’t think too hard before opting to jump aboard. Once we were across we realised that the track on the far side was only suitable for walkers – so we had to find our arm muscles once again to regain the other bank!

As we neared Bruges we overtook lots of canal boats, which were closing in on the city. It was quite gratifying to be going faster than someone else for a change – especially as these were motorised boats!

Cycling in and around Bruges 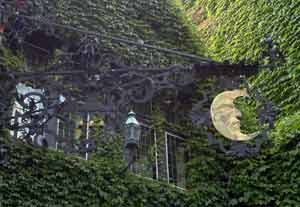 Bruges: The Half Moon Brewery's sign ("De Halve Maan"). Don't stop here if you are still in charge of your bike!

Our newly acquired bicycle sat nav came in for its first real trial in the outskirts of Bruges. It successfully guided us through various suburbs, which were quite easy to cycle through. There were not always cycleways present but the cycling was quite easy and undemanding on the whole.

Finding our way around Bruges was sometimes puzzling. The signposting was not always so easy to follow. The route from the campsite to the centre was straightforward but the roads were quite busy and noisy. As it was raining (yet again!) we opted for bus travel to see the city for the day. This was a good move, as it enabled us to spend a pleasant couple of hours at the Half Moon brewery, (pictured). There were also plenty of great things to see, including the famous belfry tower, which has a starring role in the film "In Bruges".

The next morning we got lost several times as we tried to find the main canal to Ghent. One attempt brought us right back to the central square where there is a huge fountain containing a statue of people on their bikes. After several false starts a helpful local put us on the right track.

The canal from Bruges to Ghent 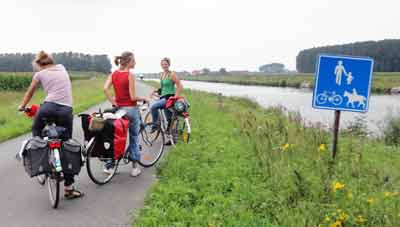 By the time we found the entrance to the right canal – and the right side of the right canal! – it was gone midday. We had ample time to reflect on the idiocy of travelling without proper maps as we pedalled towards Ghent. Most of the route down the canal was obvious enough, though there was one diversion, which was poorly signed.

Picture: The canal cyclepath looking back towards Bruges.

We ran into some young women who were on their way to Bruges for a conference. They were travelling by bike (pictured, above). That’s one of the things I love about cycling in Belgium and Holland – the casual way that bikes are used for every day things, even long-distance transport to events and holiday destinations.

In Holland we met several family groups heading for the coast by bike, with trailers and tag-alongs for the smaller children and luggage. We’re still a long way off seeing much of that here in Britain.

Would I recommend cycling in Belgium? Absolutely! Although the signposting is sometimes a little confusing and the quality of the routes is not quite up to Dutch standards, cycling in Belgium is pleasant and easy in the main. It's doubtless even easier if you take a map!

Read on for more on cycle touring in Belgium here below:

Cycling in Belgium - top of page