Are we growing a greener generation for a brighter future?

Many people like to rail against the deficiencies of modern children's lifestyles. Children are criticised for spending too much time in front of the telly, eating junk food, becoming obese and unfit; spending too much time on their games consoles and computers and generally living an unhealthy and disengaged life. Far from green, in fact.

There are many signs of change here in Britain, in the US and across the world. Children are being educated as never before about caring for the planet. There are school projects on climate change and global warming and the role of carbon emissions. Young children in the early years of school are measuring weather patterns and monitoring plant growth as part of their studies.

In Britain there has been a widespread interest in engaging children in growing some of their own food in gardens at their schools. The Transition Towns network and the RSPB have helped promote some of these initiatives.

Many schools take an active interest in wildlife and conservation. Here in Suffolk children can visit an educational centre (Foxburrow Farm near Woodbridge) which teaches about the environment and wildlife.

The Keep Scotland Beautiful group have been handing out a series of awards to 'Eco Schools'. There are calls for new green schools to be set up and there are new initiatives by environmental organisations to do outreach work in schools.

This programme has now ended but many wildlife oriented activities are still being promoted - both for children and adults. If you want to see what the BBC has by way of nature activities in your neighbourhood, see this page.

It is also worth checking with your local Wildlife Trust. Many have a local Wildlife Watch group for children. Activities can range from pond dipping to photography sessions and they are a good way to foster an interest in ecology and wildlife in young children.

A poll conducted in 2007 in the UK found that 81% of thirteen to fifteen year olds supported the use of renewable energy sources in their schools. (Source - BBC)

The UK government is encouraging participation by schools in eco projects. The organisation eco-schools.org has over 13,000 registered schools which are using some of their resources and training, or participating in competitions. The Sustainable Schools Strategy covers many areas of living, from biodiversity to water and energy use.

Schools in Britain can get involved in becoming an eco school here: Eco schools

A new generation of companies exist which market themselves on the positive impact that they have upon the community and the environment. Many of these have programmes which impact on schools.

Green campaigns and children's programmes may have a way to go - and certainly the current economic climate is not helping. Nevertheless, there are some grounds for optimism that a greener generation is arising here in the UK.

Read on for eco schools and children's initiatives in the USA.

A greener generation in the USA
- and around the world

In the US there are green schools initiatives, too.

One very successful initiative was started in New York and has gone on to inspire schools and their communities throughout the country. The Green Schools Alliance runs a competition - the Green Schools Cup. See http://www.greenschoolsalliance.org/ for more information, as well as this page on Greenfootsteps. 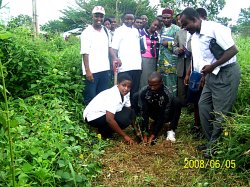 Trees for the Future works with farmers, communities and schools around the world to plant fast growing trees which help re-forest environmentally damaged areas. You can read more about them at: www.plant-trees.org

Many of the big environmental organisations appreciate the importance of engaging the younger generation in their campaigns and activities.

There are rather more political initiatives, too. For example Greenpeace was trying to get schools to avoid Kleenex products in schools because Kimberley-Clarke was wiping out Boreal forests in producing nose-wiping materials. This campaign ended in victory. You can review the details at kleercut.net.

All these initiatives may not mean we have a greener generation growing up across the world today - but there are certainly some inspiring new green shoots to celebrate!

If you want your school to go greener, see if there is a Transition Town group nearby or another national group which can help you get started.

The international Foundation for Environmental Education has programmes promoting environmental awareness and education around the globe. They now back many eco schools and other campaigns. The National Wildlife Federation in the US is a member, for example.

Many organisations such as the National Trust (UK) and the RSPB make it their business to be involved with communities and schools. Wherever you are, there is probably an organisation which can help your school to become greener - and help raise a greener generation! With the environmental problems now facing people across the world, it's important work.

If you have a story to share about green initiatives for children and young people please use the Green Tips page to tell us about it. If it is of general interest to our readers we will publish it as a separate page - and link back to your website, if appropriate.

Green Up Your Picnics This Summer!