So what's so great about hybrid cars?

Are hybrid cars really that much greener and cleaner? Can they save you any real money on fuel? How long until a new hybrid car recoups the extra you spend in buying it?

Here is a page about hybrid cars - which might just persuade you that a new or used hybrid car might just be the way forward when you next change your car! 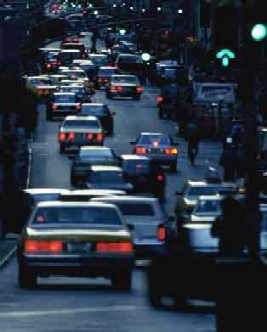 Hybrids have been around for a few years now and sales have been booming in Europe. In the US, too, sales are accelerating, perhaps especially now Chrysler is dipping it's big toes in the water!

Hybrids got off to a faster start in the US because here in Europe the diesel motor has been promoted as a way of achieving fuel efficiency.

Europe is now beginning to catch up and despite the recent economic troubles, sales are projected to rise by as much as 20% per year.

Here's a brief run down of some of the main hybrid car advantages - and a little about their limitations, too.

Picture: For all the new hybrid car advantages, they won't cure traffic congestion - but they do help reduce the resulting pollution.

Hybrid car advantages - a brief guide:
What is a hybrid car?

A hybrid car is simply a car which runs on more than one type of fuel. See Hybrid car definition for more details and some of the commoner hybrid car types.

The commonest types run on both gasoline (petrol) and electricity. The electricity is supplied by a sophisticated battery system. Some hybrids run on petrol and ethanol.

Most hybrid cars run mainly on petrol. Diesel models are available, too.

The petrol fuels an internal combustion engine in something like the traditional way. Some of the power from the petrol motor also charges up the battery when possible during normal operation. The battery then powers some of the car's motion to enable greater fuel economy.

Hybrids and pure electric cars are set to become more popular as President Obama's Stimulus Bill kicks in. Other governments across the world have also created subsidies. The US government has pledged over $14 billion to help develop EV cars and hybrids to tackle climate change and help the car industry change as stocks of oil decline.

The car industry in the US is now aiming for a 35% share of the market for hybrids and electric cars. Clearly the Obama team has recognised the hybrid car advantages!

The most common type of hybrid - known as a "parallel" hybrid - has the transmission powered by both the electric engine and the internal combustion engine. Some of these - the "full" hybrids - can run on just battery, just petrol or a combination of both. the Toyota Prius is an example of a full hybrid of the parallel type. The distance run on just battery is usually very limited, however.

There are also "series" hybrids (example: Honda Insight) where the electric part of the motor merely serves to complement and augment the gas engine. With this type of engine real savings in fuel use can be made (a 2012 Honda Civic hybrid, for example, will achieve as much as 60 mpg or more in controlled conditions) but you cannot travel on battery power alone. The gas portion of the car powers a generator and the generator then supplies electricity to run the motor.

Both types improve the efficiency of the car, which is why hybrids are becoming increasingly popular. The new lithium ion batteries help with fuel economy by allowing more use of the electric motor - and conversely less use of petrol.

PHEVs (Plug-in hybrid electric vehicles) are plug-in hybrids; this means that you simply plug 'em in and charge 'em up, pretty much like any other rechargeable battery-driven appliance! This allows the user to spend more time on battery power alone, particularly for short runs in the urban environment.

People who love them claim that they are not only cleaner than standard cars but will actually get cleaner as they age! Why? because power stations (which supply the electricity that they run on) are tending to become cleaner and greener year on year. They are not widely available as yet but conversion kits do exist and in the near future public service vehicles such as school buses may well be fuelled this way.

The present generation of hybrids are not plug-in cars - the batteries are recharged by the brakes and when the petrol engine is in use.

Major manufacturers such as Ford, Chevrolet and Toyota have PHEV models coming onto the market in 2013.

Flex-fuel hybrids are sure to be popular as they allow flexibility to use different fuel sources - ethanol, biodiesel and gasoline as required or as available.

Flex fuel vehicles take a percentage of ethanol E-85, for example without strain or voiding the warranty. There is no reason in principle why hybrid vehicles could not accept a proportion of non-gasoline fuels such as ethanol. The main problem - as I see it - is that most sources of biofuel are of doubrtful benefit from an environmental perspective.

Please see What is Biofuel for more on this issue.

If you are a lover of SUVs (Sports Utility Vehicles) the Ford Escape offers a chance to be a little bit greener. They currently cost 3000 dollars more than a conventional model but the pundits reckon you'll save almost twice that in fuel costs. Still, they only manage around a measly 30 mpg which won't sound like a lot for anyone who wants to be seriously green. Still this is quite good compared to most SUVs!

If you are a US citizen you may even qualify for a tax rebate for running a clean-fuel car. The Ford Escape has proved popular since its introduction in 2005 and Ford is set to expand production to meet demand.

The new Chevy Tahoe hybrid is able to run on battery only at low speeds with light loads. It has a sophisticated two-mode operation and  has already won awards but has been derided by environmentalists for its paltry mpg ratings.

See Do hybrid SUVs offer a green big car experience? for more about hybrid SUV options and the pros and cons of owning an SUV.

There are lots of variations on the hybrid theme and for people who seriously want to convert to hybrid driving it's important to do your homework about the different types and models on offer. Companies involved in hybrid manufacture are offering new improved models and more and more manufacturers are jumping on the bandwagon.

The first (and main) hybrid car advantage of note is that they are so much cleaner than petrol and diesel only models.

Full hybrids can run on just electricity. They have state-of-the-art batteries and they recharge while the gas engine is being used and during braking. This means that when they are being driven on the battery, there are no significant emissions, which makes them very clean indeed.

At least, it makes them very clean from the perspective of the average pedestrian or cyclist on the street. There are no noxious fumes coming out of the exhaust pipe to clog your windpipe or assault your nose!

Some of the most efficient hybrids can manage on battery only during the stop-go conditions of urban traffic. The Toyota Prius leads the field for efficiency, so far.

Of course, if they are being driven on fossil fuels, full hybrids are still polluting by emitting exhaust gases. However, they are considerably cleaner than most older cars as they offer excellent fuel combustion and filtering of exhaust fumes.

Hybrid cars which are not "full hybrids" still deliver some real gains; petrol goes further and fuel economy is easily achieved by any careful motorist. If you are a hybrid car owner you will also substantially reduce the emissions from your car of carbon gases and nitrous oxides.

Obviously, with all this fuel efficiency, hybrids are cheaper to run. This is one of the other main hybrid car advantages over conventional motors. However, they are more expensive to buy!

A while back there were reports that a Hummer SUV would be greener and more energy efficient over its life-cycle than a Toyota Prius. A little scrutiny of the "science" of this claim revealed that, of course, the Toyota was far more energy efficient. The claims were spurious, based upon dodgy data and assumptions.

But can hybrid cars really claim to be greener - greener than the conventional alternatives?

Now that they have established themselves a track record over the last few years, I think it's fair to say that they are. Why? Here are some more hybrid car advantages that show hybrids to be greener than many other cars on the road today.

Over a lifetimes use they should give real fuel economy - even up to 60 miles per gallon and beyond. This figure is set to rise, too, for some of the newest hybrid models coming onto the market.

Recyclable batteries - for ever

Hybrid car batteries (of the Prius, for example) are completely recyclable. Toyota run a comprehensive battery recycling facility for their nickel-metal hydride batteries. They also claim never to have needed to replace a battery through wear and tear!

The engines emit far fewer toxic gases than the equivalent diesel and petrol models. Diesels, for example are not offered for sale in big US cities like New York and states such as California. This is because of the cancer and smog-causing exhaust emissions.

Hybrids are regarded as far less polluting. It is likely that the EU will follow the US and Japan and implement stronger anti-pollution guidelines, which should persuade more manufacturers to produce hybrids rather than diesels.

Yes, hybrid cars are more expensive and costly (in environmental terms) to produce. But the future of personal transport should guarantee that the very real hybrid car advantages gradually win through.

Of course, if you're still driving an older type of car, you should still get as much "life" out of it as possible before changing up to a hybrid. In environmental terms, there is nothing to be gained from junking cars prematurely, unless they are seriously polluting models.

It is perhaps better to hang on to a car which is relatively inefficient and use it for multiple occupancy journeys wherever possible. (The statistics show that even Landrover 4x4 models are relatively low carbon if they are full of passengers, compared to a single-occupancy efficient car such as the Prius.)

If you are interested in buying the greenest car you can, you should also check out some of the new high MPG diesel models. The hybrid car advantages are many but there are certainly some other contenders for the greenest car badge. However, there are health concerns about the increasing use of diesel; air-borne particulates are thought to be responsible for thousands of deaths each year in urban areas.

Plug-in Hybrids: The Cars that will Recharge America has the many advantages of plug-in hybrids and more. Did you know your plug-in hybrid could recharge on wind energy overnight because wind energy is hard to store!

The Essential Hybrid Car Handbook: A Buyer's Guide Everything you need to know about buying a hybrid - including why South Park was wrong about them!

Auto Fuel Efficiency - how to save fuel