Why Organic Food is Best All Round

- best for us, for wildlife and the environment

Have you ever wondered why organic food is best for the environment?

Is it worth growing things using organic methods in our gardens? Is it worth seeking out organic foods? Are there really tangible benefits for wildlife?

What is organic cultivation and how does is it differ from conventional methods? Can we grow things just as well as if we were to use chemicals?

I believe that organic growing methods offer a sustainable and practical solution for twenty-first century gardens and horticulture. This page and the next explore why organic food is best for our health and for our planet and give reasons why we should support the organic movement, as far as possible, at home in our gardens and kitchens. The benefits of organic food are becoming better known and the soil chemistry of organic food production is becoming better understood.

I've included this page in the section on earth issues and pollution as I believe organic growing is an important part of the battle to preserve our environment from pollution.

This first page on "Why organic?" mainly looks at the differences between chemical agriculture and organic systems.

All muck and magic? 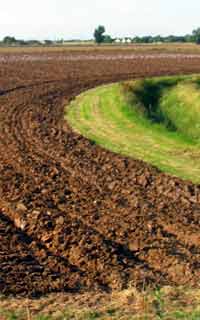 Why Organic Food is Best:

"All muck and magic" used to be a popular catchphrase used to dismiss organic methods.

People often still believe that organic cultivation is just horticulture minus the modern science. Nothing could be further from the truth.

Modern organic methods are firmly based on science; the science of the soil and its organisms. Technology also plays a part.

Organic farming cleverly mimics nature, using composting and other techniques to deliver rich nutrient sources to the soil and its myriad inhabitants.

The constant breakdown and absorption of organic matter leads to a rich, powerful soil, full of the building blocks of healthy plant life. We all benefit: the birds and other wildlife - and of course, we benefit by being healthier ourselves and having healthy children.

Here's a brief look at the two ways of farming.

Why organic? -
A (very) potted history of fertility

Organic horticulture is nothing new.

Intensive organic growing systems were in use throughout China and India, Japan and Korea as much as 4000 years ago. In Japan people were growing food on a fraction of a hectare per head. In Mexico, too, the Incas used organic methods to raise large crops to feed a burgeoning population.

These agricultural systems were both organic and intensive. How did these early cultures do all this? By recycling and composting virtually everything!

(If you want to study organic growing methods in some depth the very best book I have read on the subject, so far is Organic Futures by Adrian Myers.)

Before the 19th century most cultivation was broadly "organic" in that few chemicals were used on the land. But here, in Britain and the west, organic horticulture was not very developed.

One of the first ways to improve fertility was crop rotation.Simple crop rotations were introduced and practised here in Saxon times. Before that farmers simply left fields fallow to restore fertility. Different plants take different things from the soil, so rotating crops gives the soil a chance to improve though natural mulches (decayed organic matter) and the activity of microbes.

By the 19th century, the "Norfolk" four crop rotation became widely used - wheat, turnips, barley and clover were rotated over 4 years and no fallow period was needed because of the fertility-building properties of clover.

Sewage was also sometimes used on fields to promote fertility. In the 18th Century night soil was collected from London cess pits and sold to be used on farms.

(Animal slurries are still used today as fertilisers. This does not really count as an organic method, as there are problems with run-off and even contamination. Organic authorities generally agree that animal manures need to be composted before being applied to the land. Human sewage is at present unsuitable for organic cultivation because it is contaminated with heavy metals.)

By the 19th century the power of fossilized bird guano (dung) was being exploited by agriculturalists. Vast quantities were shipped to Europe and elsewhere but demand outstripped supply. In the early 20th century cheaper chemical alternatives were developed.

Modern chemical fertilisers were developed from an understanding of plant chemistry. The rudiments of plant and soil chemistry were first discovered by Justus von Liebig in the mid 19th century. He realised that plants could absorb nutrients held in liquid solution. He also identified the main nutrients - Nitrogen, Potash (Potassium) and Phosphorus (N,P,K). (He also brought us the Oxo cube!)

Picture, right: barnowls and other birds of prey are sensitive to pesticides which accumulate in their bodies.

Modern scientific understanding of plants' needs has advanced to include other nutrients such as boron, molybdenum and zinc. Synthetic fertilisers may not always supply these trace elements. Many conventional farmers use the basic chemical fertilisers needed to produce heavy yields and as a consequence soils become depleted of necessary elements. This is because the plants take what they can from the soil but the mineral levels gradually decline as these minerals are not being replaced.

For example, many pastures in Britain today are deficient in zinc, so the beef and milk from such land is also deficient. Zinc levels in meat have declined significantly in the last 50 years. Zinc is important in our metabolisms for a host of reasons. It helps maintain good immune function and promotes growth, to name just two key properties.

Another problem with synthetic fertilisers is their tendency to cause burns to the plant. Exact doses have to be administered to the plant because it is not drawing nutrition from the soil but mainly from the dissolved chemicals. If too much arrives at once at any one spot, then leaves or roots may be burned. (This can also happen with some badly-managed organic fertilisers but it is less common.)

To cope with this problem some chemical fertilisers may be pelleted so as to break down more slowly in the soil and feed the plant over a longer period. 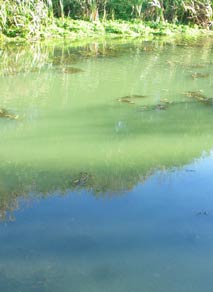 Artificial fertilisers often run-off from the land and this causes enormous problems in nearby water sources. Where I live you can regularly see blue-green algal "blooms" around the fringes of the reservoir. Blue-green algae are toxic in such concentrations and dogs and other swimmers may be poisoned.

Picture: Toxic blue-green algae at the edges of a reservoir

Why Organic Food is Best:
Increased pesticide use

Farmers using a high proportion of artificial fertilisers often have to use enormous quantities of pesticides to stop attacks by aphids, fungi and other pests. Chemical farming processes don't adequately replenish the organic matter in the soil which is lost due to harvesting. Because of this, as the years go by, there is less and less organic matter in the soil. Soil organisms - which feed on this organic matter, then die off. These soil organisms should help the plant to grow strong and resistant to attack. Without their help, plants are left susceptible to attack by the pests such as those originally exterminated through pesticide use. This in turn necessitates the increased use of chemical fertilisers and more pesticides.

Many people believe that organic farming could never be relied on to feed the world. But organic farming and intensive agriculture are by no means mutually exclusive. The agroforestry movement and permaculturalists are developing ways of farming that can produce big yields. Although yields may still be a bit smaller than those from chemical farming, very often there is more than one crop from a piece of land, making the organic system overall more efficient.

Why Organic Food is Best - top of page

Cause of Land Pollution - Green Earth

Pesticide problems are a growing concern