Pesticides and Pollution
- the link is clear

Pesticides and pollution are linked - but how exactly?

What are the effects of pesticides? How do they cause pollution? How big a problem is pollution from pesticides? Who does it affect and how?

And what can we personally do about it?

Here are a few pointers.

These brief outlines of major environmental problems are offered as a quick overview only. The issue of pesticides and pollution is far too complex to do justice to on a website such as this.

If you believe that you are affected by pesticide pollution, check the links section for organisations which can help you.

Pesticides and pollution:
How widespread is the problem? 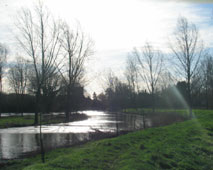 Pesticides are a cause of pollution, affecting land and water in particular. The problem is huge and growing.

In the US pesticides pollution has been found in nearly every lake, river and stream, according to a US Geological Survey in the 1990s.

Other nations are affected badly, too.

Pesticides cause pollution by running off agricultural fields and from horticultural land and domestic gardens, too. Rain water washes the chemicals into nearby water sources.

Here are some of the bad effects of pesticides.

Picture: Rivers and other water sources may be affected by pesticides. Flooding may cause additional problems.

Pesticides and pollution of the soil

Pesticides decrease biodiversity in the soil because they do not just kill the intended pest; they often kill many of the other small organisms present.

When life in the soil is killed off, the soil quality deteriorates and this has a knock-on effect upon the retention of water. This is a problem for farmers particularly in times of drought. At such times, organic farms have been found to have yields 20-40% higher than conventional farms.

Soil fertility is affected in other ways, too. When pesticides kill off most of the active soil organisms, the complex interactions which result in good fertility break down.

Plants depend on millions of bacteria and fungi to bring nutrients to their rootlets. When these cycles are disrupted plants become more dependent upon exact doses of chemical fertilisers at regular intervals. Even so, the fantastically rich interactions in healthy soil cannot be fully replicated by the farmer with chemicals.

See here for more on the benefits of growing food organically

So the soil - and our nutrition - is compromised. We get large but watery vegetables and fruits, which often lack taste and nutrients and may even contain pesticide residues.

One of the best books ever written on pesticides and the damage they cause is Silent Spring by Rachel Carson. It is about the systematic poisoning of the American landscape by pesticides in the 1940s and 1950s.

Modern pesticide pollution is - perhaps - not quite so devastating as that revealed in this influential book - but it is worth reading for the cautionary tale and because it explains how business interests were put ahead of the common good.

Many environmentalists would argue that something similar is going on today with the use of genetically modified crops. 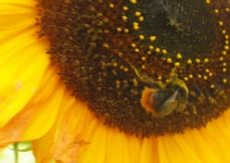 Pesticides have other bad effects on the eco-system.

The misuse of pesticides can cause valuable pollinators such as bees and hover-flies to be killed and this in turn can badly affect food crops. Bees have been suffering a serious decline in recent years for reasons which are not yet clear (but pesticides are thought to be implicated). We interfere with our allies in the natural world at our peril. Without bees, many food crops would simply fail to grow; they pollinate the plants so that they can produce fruits and grains.

Picture: Pesticides are almost certainly causing a steep decline in many insect species, including bees.

Amphibians such as frogs are particularly vulnerable to concentrations of pesticides in their habitat.

Atrazine, one of the world's most popular weedkillers, has been found to feminize frogs, leading to sterility in males. It is still in use in the US, with about 80 million pounds being applied annually, but has been banned in the EU countries since 2004.

Atrazine may also affect male fertility in humans and is a known endocrine disruptor.

It is counted by PAN as a carcinogen and water contaminant and given the tag of "bad actor" - meaning that it is regarded as being of the highest concern in at least one category.

See this Care2 article for more on atrazine in weedkillers.

This is just one example of a pesticide which has caused pollution; there are literally hundreds of examples if you search PAN's database.

There are fears (and some evidence) that through natural selection, some pests may eventually become quite resistant to pesticides. Farmers may then try increasing amounts used of pesticides, making the problem worse.

Many pesticides contain chemicals which are persistent soil contaminants. Their effects may last for years.

These examples are fairly typical of pesticides and pollution, affecting the lives of people and wildlife alike. Because of the profits to be made most companies are slow to accept responsibility and the problem is hidden by the use of numerous trade names for the one chemical.

Bioaccumulation is where pesticides accumulate in the tissues of individual organism over time. Many pesticides do not decay naturally in the environment but instead accumulate in animals and birds at, or near, the top of the food chain. This is known as bio-magnification or bioamplification.

This was clearly seen in the nineteen sixties when many birds of prey became almost extinct in Britain. One of the causes was poisoning from chemicals such as DDT which accumulate in the tissues and livers of birds which have fed on other creatures which ingested non-lethal amounts of the contaminant. Because the pesticides concerned do not break down readily, each predator species accumulates more and more of the poison as it spreads though species lower down the food chain. Persecution and loss of habitat also played a part. Now organisations such as the RSPB work very hard to restore birds of prey to their former ranges.

Pesticides are not the only chemicals to follow this pattern; heavy metals and radioactive particles can similarly affect wildlife. (Humans can also become victims.)

The use of DDT was widely discontinued after Rachel Carson exposed its terrible effects in the book Silent Spring. It is still used in carefully moderated anti-malarial work in parts of southern Africa and elsewhere.

There are other pesticides which bioaccumulate. For example chlordane, which builds up in fatty tissues and is linked to cancers and other serious health problems. It is now widely banned but still used for termite control in the USA. Such Persistent Organic Pollutants (POPs) as chlordane and heptachlore are now widely banned.

According to the American Bird Conservancy, many US birds are still affected by pesticides. Grassland species are especially vulnerable and raptors such as hawks, owls and kites are still at risk from bioaccumulation.

Pesticides can also endanger workers during production, transportation, or during and after use.

Bystanders may also be affected at times, for example walkers using public rights of way on adjacent land or families whose homes are close by crop spraying activities.

One of the main hazards of pesticide use is to farm workers and gardeners.

A recent study by the Harvard School of Public Health in Boston, discovered a 70% increase in the risk of developing Parkinson’s disease for people exposed to even low levels of pesticides. Even long-used pesticides such as pyrethroids have been suspected of neurotoxic effects. See www.beyondpesticides.org/ for many studies linking Parkinson's disease with pesticide exposure.

Pesticides and pollution:
The effects of pesticides upon children

Children are particularly vulnerable to the toxic effects of pesticides. Studies have found higher rates of brain cancer, leukaemia and birth defects in children who suffered early exposure to pesticides. (A National Resources Defence Council study)

See below for an example of OPs affecting school children.

Pesticide poisoning in children is probably under-reported owing to the number of possible causes of symptoms, especially mild ones. The University of Missouri has produced a list of the commonest pesticides identified in poisonings, which gives an idea of the scope of the problem and some of the methods used to treat cases. It is almost certainly true that training for recognising such poisonings is less than adequate and needs improvement. View their report here.

Pesticides and pollution:
Diet as a source of exposure

The main source of exposure to pesticides for most people is through diet.

Residues, set by governments, are limited to tolerance levels that are considered safe, based on average daily consumption of these foods by adults and children. But, as we all know, some people do not behave as average!

For example, when I used to work in a college, there were students who regularly consumed 6 or 7 packs of crisps in a day. And toddlers are notorious for becoming obsessed with one or two foods only.

Most modern pesticides are carefully regulated by law in most countries. In the US the EPA conducts studies and licenses pesticides for use.

However, they cannot actually control what happens when a particular farmer opens a particular product. We depend upon the farmer to read the label and follow the guidelines to the letter. Accidents will and do happen.

Some pesticides are so toxic that their use is restricted to licensed, trained applicators. In the US it is a violation to apply any pesticide in any way that is not in accordance with the label for that pesticide. Further, it is a crime to do so intentionally.

In most counties pesticides are classified according to their toxicity. Most acute pesticide poisonings result from disregarding the label directions.

If you must use toxic pesticides at all (and there are usually safer alternatives) - then the most important advice is:

Read the label!  - and then follow the instructions to the letter.

Apart from political action, anyone who is concerned about the toxic effects of pesticides should try to eat organic food whenever possible. Organic foods are grown without toxic pesticides for the most part.

If you are growing food or flowers and other plants at home, consider doing everything by organic methods. There are many strategies available to organic gardeners to avoid attacks by pests.

The toxic effects of pesticides on our foods and our land and the effects on our health and the health of our children make it an issue which is sure to become more and more crucial.

Some other pages that relate to pesticides and pollution which may interest you:

Pesticide Problems are a Growing Concern

Missing Bees - a World-wide Problem That Concerns Us All

Why Organic Food Is Best